Sunday Morning On the Snowy Border: Thoughts on Blossom Dearie 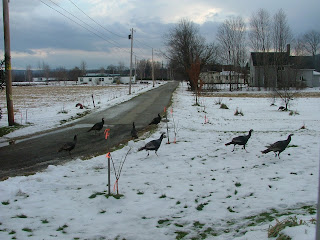 Big snow coming. Only December 2 and already we're under siege. This year it matters more because of all the driving we're doing. Sigh.
The kids are playing Monopoly with Woolfoot Husband and I'm transferring a few long-lost favorite CDs to iTunes. (Earlier this morning I went in search of our Charlie Brown Christmas CD - I found it and a few others as well).
As I write I am listening to my Blossom Dearie CD that I must have bought at least 10 years ago. I like, even love, many jazz singers: Sarah Vaughn, Etta James, Helen Merrill, Nina Simone (particularly her lately) and Blossom Dearie, She's hardly a household name but listening to this again reminds me how great she is: a cool, jazzy white girl who wore glasses and sang with Annie Ross in Paris nightclubs in 1952. How cool is that? What must life there have been like then? According to the liner notes, she returned to New York in 1956 and appeared at such clubs as "Chantilly" and the "Show Spot." One can just imagine what that life was like as well.
I thought I had discovered Ms. Dearie (her name is real, by the way. Her dad was Scottish and Dearie is a common Scots surname - he also picked her first name) in the early 90s. A couple of years ago I bought my kids the Schoolhouse Rock video (also fabulous) and recognized her voice stratightaway in the songs about Number 8 and adjectives - songs which I rememberd fondly from childhood and could sing by heart before I was 10.
So much for this morning's art review. In other news, recently a giant (25 at least) flock of turkeys has been clambering over the lawn and fields here at the last house. Wild turkeys appear to be taking over Vermont. They seem as common as crows lately. Here's a picture of them fleeing when I opened my front door on Thursday this week.
Maybe we'll try to get ahead of the snow and get a Christmas tree today so that if we're stuck home tomorrow we'll have something to occupy our time.
Posted by Kim Velk at 8:49 AM No comments: