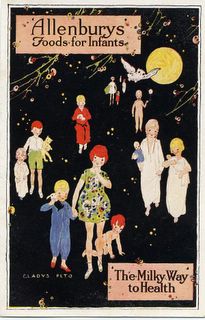 An Image Famous on the Buses and Subways of London in the 1920s. More on this later.
Posted by Kim Velk at 8:52 AM No comments: 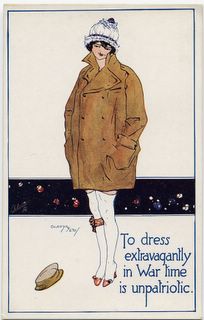 Gladys Emma Peto was born in Maidenhead, Berkshire outside London, 1890. As near as I can tell, she was born at the at the low-to-middling-end of the British upper class.

Peto was famous in London and perhaps throughout the UK and even throughout the Empire in the 1920s and '30s Anyone who lived in London and got around at all would have encountered Peto's work. Her advertising illustations were prominently featured in magazines and posters. She illustrated books for children and wrote some of the stories herself. She designed dresses and theatre scenery.

This being the long Thanksgiving weekend I have had a few minutes to indulge my inner-collector and I have been organizing my neglected collection of Petoiana. Yesterday, as I framed and hung up an advertisement I bought last week on Ebay for the new (in 1929) Gladys Peto Nursery Ware collection of the Tuscan Pottery at Stoke-on-Trent, it occurred to me that I have probably gathered the largest collection of Peto artifiacts anywhere. OK, I know. Big whoop. Who else cares? Well, there are at least a few, judging by the attention her books get on Ebay. And, of course, there may be some descendants out there - I hope there are - with crates of her things. But in my five or so years of collecting, which included a year of hosting an expensive web site devoted to Peto, I have not encountered these descendants. I suspect that if she had children (and it has been oddly hard to learn this basic fact) they would be in their 80s now. Grandchildren likely in their 50s. Since Gladys died in 1977, her grandchildren would have known her well. If any of you get to this Blog, send me a comment!

Since dropping my web site two years ago I have always felt a little bad. It got a couple of hundred visitors, not that many really, but I felt like a keeper of the flame who had dropped the torch. Really, at over $200 a year, I couldn't keep it up in good conscience. I also was not sufficiently technically proficient to transfer its contents to some free web space. So, it perished. But now, I have this Blog and this being Sunday and a long weekend and my kids still asleep, here, for your consumption you dear wide world, is my bit of Peto scholarship.

As noted, she was born in 1890 and died in 1977, in Ireland. She attended Maidenhead High School and art classes in the town before heading off to London to study at art school there. She married C. Lindsay Emmerson, of the Royal Army Medical Corps, and with him during the 1920s she traveled with him to Malta, Cyprus and Egypt. Among the most desirable Peto books are the guide books she wrote for English "Sojourners" to those places (i.e., long-term residents). Malta and Cyprus and The Egypt of the Sojourner were published by J.M Dent in London for their Outward Bound Library.

Peto's work remains appealing now for its attractive and inventive art deco style, clearly influenced by Aubrey Beardsley. At its best she captures something magical of the world of childhood and cutting-edge in the world of fashion. Aside from her work, her biography is also full of interest. Though she came of age before World War I, she took a daring career path and became a successful commercial artist. She was not a Bloomsbury radical (they didn't tend to marry army colonels) but neither was she a typical woman of her day. Reading Peto's works, especially her travel book on Egypt, it's clear that she played the part of Colonel's wife as much as she devoted herself to her work.

Sometime in the 1920s the Empire Annual for Australian Girls published "Poster Art Work for Girls, A Talk With Miss Gladys Peto the Well-Known Poster Artist." (The Empire Annual is, itself a worthy subject of study, combining fiction and practical advice to help girls of the time make their way in the world. The annual with the Peto interview includes tips for the "the Family Failure" on how to get along).

Peto there discusses her beginnings. Her family was not especially artisitic, except for herself. As a girl in Maidenhead, she would go out "in her father's trap" and notice interesting people along the way. She would get home and sketch them. From thence to High School then Art School. After a few years learning academic techniques, she started beating the pavement to various editors and publishers with her sketches expecting instant success. She didn't find it but sold two little drawings. It was a beginning. "And [her] family's somewhat discouraging queries as to how I was going to live on that amount did not debar [her] from trying further." In keeping with the Empire Annual's mandate to offer guidance, Gladys lets the reader know that a girl with training, talent and inventiveness might well be able to make her way "there is a good living to be made from this particular type of artistic endeavor." No figures are mentioned, but the interviewer, one George A. Wade, notes that "several people are aware that this young lady, as one of the best-known depicters of "fashionable life," and a designer of posters which attract much public attantion, makes an annual income which many men in very high positions might well envy."

Well, the kids are up. More next time. I will try to upload a little Peto artwork for your consideration.

Jay Peak is open and I think today's the day to start my little girl on a snowboard!
Posted by Kim Velk at 7:01 AM No comments:

One of my favorite movies is "7 Up" - can't think of the name of the filmmaker. It's a really fascinating documentary involving interviews, every seven years, of a group of people who gave the first interviews when they were seven years old. It occurred to me watching the most recent version a couple of years back that this must be sort of like how God sees us - a lifetime compressed. It started as an exploration of class in England and its effects. It's still about that but I think it's more about the trajectory of life - perfect somehow, though full of pain and struggle. Adam and Even banished from the Garden but not forsaken. Each person followed (and a few of the stiffer ones have dropped out) struck me as lovely somehow - so worthy of compassion. They're all well up into their 40s now, I think, and have learned the lessons of life. If you haven't seen it, get it.

Why am I talking about this? Because I have been absent from this Blog for year. Just too busy with my crazy job as a divorce lawyer in Burlington. I have never had a more difficult job - but in all the trauma, time has flown. Time does fly on us. So here I am back again. Physically, more of a ruin, having neglected friends and family too much. (I have a pile of unsent birthday cards and some dear relatives that I haven't seen or spoke to or corresponded with in more than a year.) Another deep lesson learned by blogging, or failing to blog.
Posted by Kim Velk at 9:25 AM No comments: