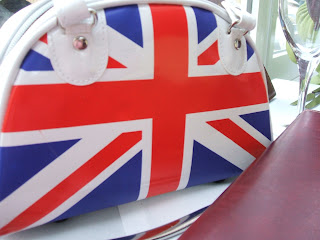 Back from the UK for more than a week now (after my long-desired first-ever trip) but I still have a bunch of observations I want to record before I forget. When friends there, and here, asked me what surprised me about England a couple of things have leapt to mind. First, London, though it's "built environment" as the architects say, is echt English, it's gestalt was echt international - far more than I had expected. It seems like three quarters of the people with whom we dealt, desk clerks, shop clerks etc. were clearly not from England. They were from everywhere;India,Eastern Europe, Western Europe, North America. Of conversations overheard on the bus and tube, fully half of them were in languages other than English and the English we heard was often accented with something other than native British tones. I felt like I heard almost as much French as I hear in Montreal. It was sort of astounding to me, though I suppose it should not have been. England is connected by a landlink (Chunnel) to Europe now and we have been hearing for years about the immigrant communities in England. I have been watching BBC America and have seen all of Prime Suspect so I should have been ready for this, but it did catch me off guard. Very interesting. What does this portend for the future I wonder?

The other "surprise" was more subtle and marks me out as a bit stupid. I was a little taken aback that life in England is as ordinary as it is. La vie quotidien has to be lived there just like here! Who'd have thunk it? English people there are not engaged day-to-day in living out a costume drama, or a Prime Suspect episode, or a Thomas Hardy novel. They get on and off buses, go to the supermarket; take children to school (although there is a lot of drama in some of those school uniforms). Of course, I knew this intellectually, but this ordinary aspect of life there also caught me a bit off guard. As I considered this, I realised that all my contact with England has heretofore been in the news, books, movies and TV shows - always something constructed for effect or reported because of its great interest; life distilled and packaged. When one actually get there and start walking around, however, one realizes people there are, wait for it, a lot lke people here! Don't get me wrong, it was different from home in many ways but not so fundamentally as I guess I subconsciously expected. 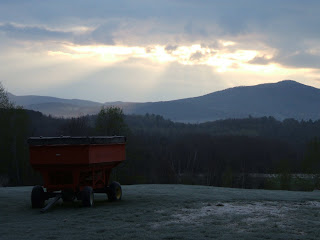 Here's a picture I snapped on Thursday as I was loading up the kids things for school and the garbage for the dump (or "the tip" as they say in England). It was a frosty late April dawn. The farmer who rents our land has gotten started with his plowing. Spring is really here, at last.
Posted by Kim Velk at 8:19 AM 5 comments: