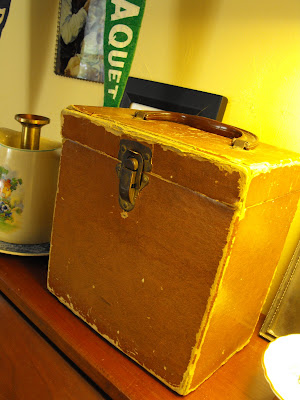 What, with the threat that the credit card companies may jack interest rates through the roof at any moment and a sizable chunk of school tuition still hanging over our heads, your hostess has had to really discipline herself in matters of getting and spending. It’s Sunday, and there’s an auction going on just down the road as I type this, but I am here – not there. It isn’t easy, either. Fortunately, having attended the preview, I know there is nothing being sold today that I absolutely can’t live without – but who knows what bargains may be flying into the hands of others even as I write! Oh well. Something has to give. Enjoy those bargains, my fellow bidders. I am hors du combat.

To be perfectly honest, however, I have managed to forage a few, wee items during these last couple of weeks from an antique shop or two. Let’s start with the happy little item at the top of today's post. Here's another view: 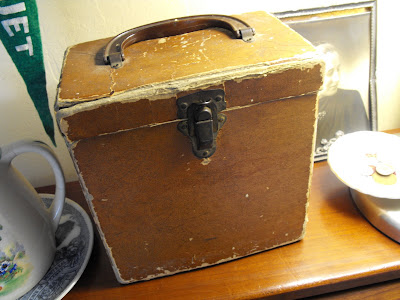 The backstory: Shackleton and I stopped by an antique store in downtown Newport, Vermont yesterday while the Understudy was at her piano lesson. As previously noted, Shackleton is a fine and enthusiastic auction participant and likes to trawl antique shops as much as I do.

I told him upon entering this store, which is new to us though I have been by it a thousand times, that he could get “one little thing.” He tried out a few obscure campaign buttons on me, along the lines of “Clark for County Treasurer,” but eventually lost interest in those and started gravitating to toys (too expensive). Fortunately, he also has an unaccountable interest in boxes. In the end, I persuaded him that this great shabby-chic record holder (for 45s, remember them?) would be great. ($1.50). While rummaging through the back room of the shop, I found these 1950s felt souvenir banners from obscure Canadian recreation destinations ($2.50 apiece). Atmospheric, no? I tried to persuade Shack that these would be great for his room but he wasn’t convinced. I have “borrowed” his 45-holder for my room for the time being, with his agreement, and added it and the banners to this fussy little tableau. 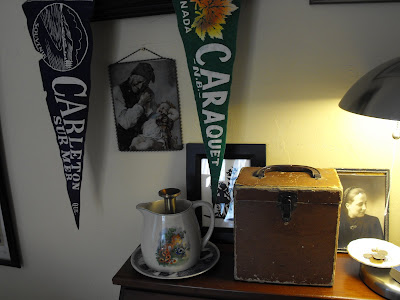 (My grandfather built this beautiful desk and the picture is of my great Aunt Margaret – a career school teacher who noted that she was “once young and beautiful” when she gave this picture to my sister years ago).

I was worried that the Understudy would be put-out about our buying stuff when she wasn’t around to get something herself. 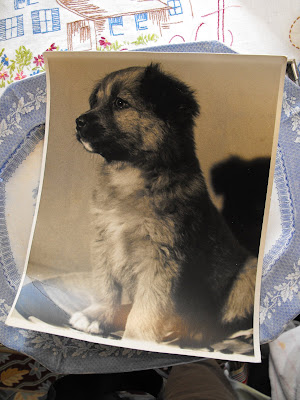 I found a basket full of the work of amateur photographers of yesteryear. I found this fetching 8 x10 of a collie puppy for her. I will pop it in a frame and put this in my room as well. (Sorry kids. You can really have it all when I am dead). Note to self, amateur photographers of yesteryear, along with our family snapshots from early to mid 20th century, are one of the coming hot areas for collecting. 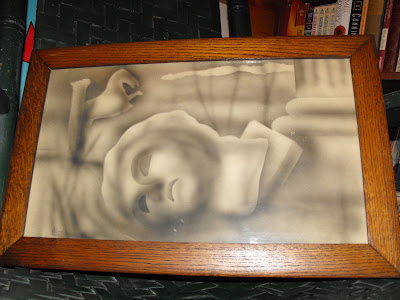 Here’s one other item I picked up since we last spoke. It’s an airbrush print – I am still not exactly clear on the process by which such things are made – by an artist called Frank Osborn. I got this at M. Lewis antiques in Waterbury, Vermont about two weeks ago. The store assistant told me it had been his, but he had tired of it and decided to flog it in the shop. It is grim, yes, it is titled in pencil “Ruins” – but it has that je ne sais quoi that makes it art.

The oak frame and the glass are original. The print is signed and is dated 1930.
This purchase gave me some room to do my favorite thing, which is research stuff I have bought. Shackleton is getting some reading tutoring near Burlington these days and this has left me with a couple of hours on my own in what passes for a big city here in Vermont lately. I feel I put those hours to good use this week by getting myself into the library at the University of Vermont and checking out Mr. Osborn, who has an internet presence but one that is fairly scant. He was born in Altamont, New York in 1887. That’s one town over from where my Dad and stepmom live now so, already, that makes him interesting. He was “famous” or sort of, for a while largely because of a method for making airbrush prints. He married another artist called Alice Newton Osborn. She was wealthy and they became patrons of the arts. They lived in New York city and environs during the 1920s and 30s, but left a lot of art to the Philadelphia Museum of Art. They wound up their lives in southern Vermont, in the postcard-pretty town of Manchester. He died there in 1948.

There are several mentions of Osborn and his works in contemporary art criticism in the New York Times. The Albright-Knox gallery in Buffalo has one of his airbrush prints and there’s a New England Dealer selling another (asking about $250). Also of interest was the record of a sale at Freeman’s auction house in 2000 when a bunch of his paintings were on the block. Only one went for anything like real money (a nude, in the manner of Matisse, for $1,900). 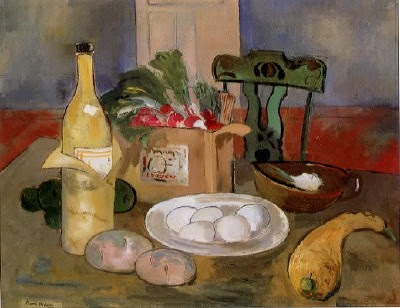 An Osborn Painting from Artnet - Good? I think so.

Unfortunately, “Osborn” is not in a league with the artists who once traveled in his sphere. E.g., Man Ray, Marcel Duchamp John Sloan, Henri Matisse, Pablo Picasso,Georgia O’Keefe, Childe Hassam etc. Really, no kidding.

The most fun thing I have learned about Osborn since I got started down this road is that he was a participant in every year between 1917 and 1933 (except 1930, the year he made my print, interestingly) in the annual exhibition of the Society of Independent Artists in New York. This Society, based on the famous “Societe des Artistes Independants” in Paris (sorry, can't do those French accent marks), likewise had no juries, nor prizes and was famous for hanging art in alphabetical order. Anybody could join the society for $5 and pay $10 to get two pieces in the show. All those artists listed above were represented (along with a hundred others who are less well known). Its 1917 show, in which Osborn exhibited two pieces, is an art history milestone. Over the years, the quality of the material went downhill and it is interesting that Osborn stopped showing up after 1933 (when he exhibited three air brush prints). And, (will the wonders of the internet never cease?) we can all of us these days access the catalog for that 1917 show on Google. Osborn’s entries, something called “Picnic” and something else called “Portrait” unfortunately for me, didn’t get illustrated in the catalog but lots of other stuff did. It is amazing to see whose names and whose art is still famous 80 some years on and who has bubbled under utterly. Do I feel a Wikipedia article coming on? I think so.

One Last Thing Here’s an item the Understudy picked up at the MoMA design store in NYC a couple of weeks ago. I suppose it is a standard museum store item, but it’s still cool. The video was written, produced and directed by the Understudy. Like so many films, it drags a bit in the middle, but it has a surprise ending so hang on (keep your speakers on - and your expectations at an appropriate level...).