Have I Mentioned About My Bad Taste and Tacky Habit of Naming Prices That I Paid for Stuff? 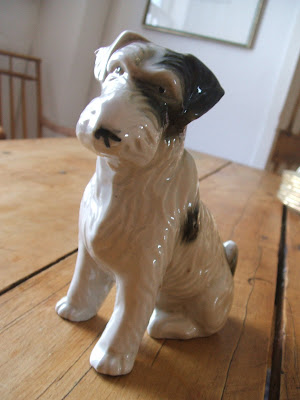 OK, let me put down my banner and my flamethrower. Whew. Those were heavy.

Now that I have blazed my way through that Snowboard thing (see the last post) we can get back to talking about junk that I have acquired. I am pleased to tell you that I have just passed through a particularly charmed junking period. Oh wait, I think I need to start calling my finds "trouvailles". This occurred to me last night as I was reading a biography ofJoseph Cornell. If you are not familiar with Joseph Cornell, the Amazon.Com review of this book sums him up this way: "Joseph Cornell (1903-72) lived in Queens with a domineering mother and severely handicapped brother while creating unique, haunting art: boxes filled with lovingly assembled objects and printed images."

In other words, Cornell bought junk (that he loved, as I do), and made art (as I don't, although I do blog about it). Andre Breton was doing the same thing over across the pond in the 1920s and '30s, while Cornell was prowling the streets of New York. Breton called his junk trouvailles and his manipulations of it made him famous.

I am not planning on making shadow boxes or collages and I have only a little sympathy for the surrealists but I am with them on the mysterious allure of old objects. Also, I would like to justify this acquisitiveness of mine as a form of art and a French word can help me along that road.

So, shall we take a little tour of recent Woolfoot trouvailles? 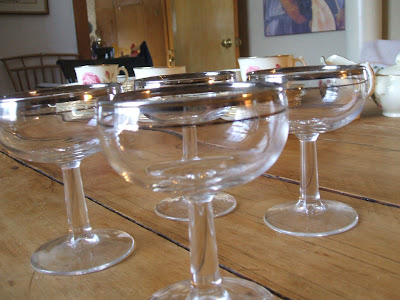 I admired but I did not buy. Better for me the cement floors and jumbled shelves and the tattooed and pierced staff at the Household Goods store. But back to our objects. These beautiful silver rimmed Champagne glasses (that's what they are, I have decided) were 25 cents apiece. I bought a water glass, there was only one, in a similar style. It weighs about half a pound and must be crystal. It was 50 cents. Also a bone china coffee cup (25 cents). I picked up a boxed set of Cocktail Piano jazz, circa 1970. This looked really promising. The set has five albums, all of them in pristine condition. I didn't notice til I got them home that they had been produced by Reader's Digest. Not a good sign. I played the first one. Think: background music for restaurant scenes between Darrin and Mr. Stevens on Bewitched. I wanted Marian McPartland I got Montovani. Well, you pay your 50 cents you take your chances.

I also picked up a few other vinyl records for 25 cents apiece. Both were traditional choral music from England and New England etc. Both, also, unfortunately, had a little damage. But, looking on the bright side, since I have managed to listen to most of both of them a couple of times (only a few songs skip), I am already ahead of what it would have cost to play even a couple of songs a jukebox once.

Of course, not many jukes have traditional English carols on offer. If they did, I suppose it would cost a lot to play them since your average bar or pizza place would probably be cleared of its customers within the first stanza. 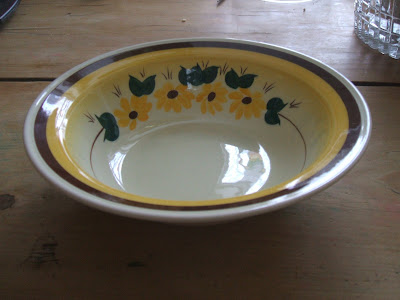 I also got this Vernon Kilns of California vegetable dish in the brown-eyed Susan pattern. Frankly, I don't like it much but I know some people do. It's on offer over at Ebay right now. We'll see if the $10 asking price comes through. If it does, my whole day's Recycle North shopping will be covered with about $3.50 in profit. If I don't sell it, that's OK too. It is a handy size. 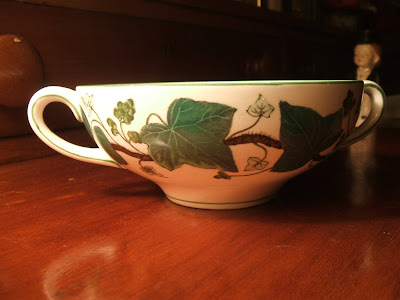 Let's move onto another one of my favorite haunts, Degre Auction House in nearby Westfield, Vermont. They were having an "indoor garage sale" to clear out their back room this weekend in advance of their regular Sunday auction.

The kids and I stopped in on Saturday morning to preview Sunday's goods and check out the clearance items. Of course, we managed to find a few things to buy at the garage sale. Among various prizes for the kids (a "peace bear" beanie baby for both of them and a vintage '70s Dairy Queen Tumbler in red and yellow for the Understudy) I snagged the "Made in Japan" Scottie Dog at the top of this post and this beautiful Wedgwood "Napoleon Ivy" soup bowl. I think that set me back 50 cents. The bowl is also on Ebay now, mostly because it doesn't nest easily and though I love it I don't really need it. Thrill of the hunt and all. The Scottie was shoehorned into the breakfront. He's staying. 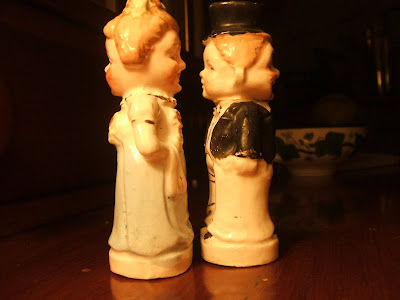 And how about these two-faced salt shakers? Odd and scary, but in a totemic kind of way, no? They are, I think, survivors from prewar Japan. I love my photos of them that I have posted here and now wish I hadn't put them up on Ebay shortly after I got them home. Someone has already bid $5.99 so I guess I have to part with them. Silly me.

We went back to the auction house on Sunday morning for the main event. The auction was not as crowded as usual, and I wondered why. The goods on offer were, largely, an unappealing mass of 1990s "collectibles", which may have kept down attendance, or maybe it's the scary economy. In any case, there were still some gems to be found and I got one of them. It what may be my best buy to date, I picked up 48 pieces of this China by Royal Swan in Staffordshire. Behold: 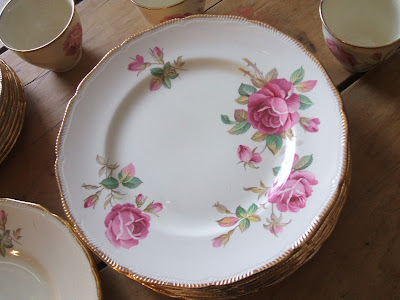 These date from around 1950. There are a couple of chips on some of the saucers and one teacup is missing but otherwise I have the whole nearly mint service for 8, complete with platter and creamer and sugar bowl in all its genuine-22-karat-gold glory. Delivered price (I hope you are sitting down): $10, or $11.66 with buyer's premium and tax.

We were having company for tea that day, our lovely English friends. They had gone to the auction (on my recommendation) before we got there and left pretty quickly, no doubt put off by the hideous 90s dreck. They were charmingly and gratifyingly amazed by my China bargain. I had, of course, spread it out to maximum advantage for their visit. 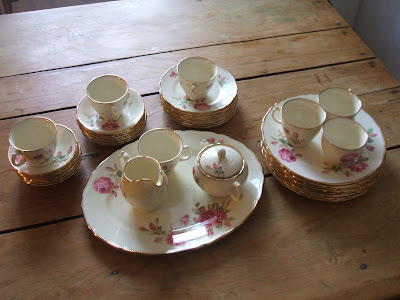 Oh, I forgot to mention that on Saturday the kids and I also hit a library book sale at the beautiful and famous cross-border Haskell Free library in Stanstead, Quebec and Derby Line, Vermont. (There is a line on the wood floor indicating the international boundary). There, I got a folio sized collection of the works of Joseph Conrad with some great woodcuts (1942), a biography of Stephen Leacock,one of Evelyn Waugh, and my current reading, the life of Joseph Cornell, as previously described. Also a book on the St. Lawrence River for Shackleton (one of his middle names is "Lawrence" so he has a particular interest). Another $2 well spent, wouldn't you say?

I have been blogging late into the night, waiting for my Dad and Stepmom to arrive. They have, apparently, gone to the bed and breakfast where they are staying and won't be here til morning (with all this junk there is hardly room for visitors in the guest room). They have traveled here from New York for Thanksgiving dinner tomorrow, which we are hosting and which will also be attended by our Oxford friends (who missed the China, poor them).

I am already feeling thankful, "for all that we have received [...]". I hope you are too. I pray a Thanksgiving blessing on all of your heads.
Posted by Kim Velk at 7:37 PM 2 comments: