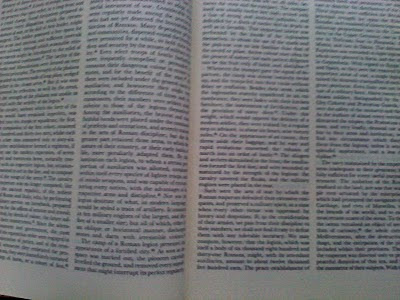 My brother doesn't like to read for fun. (I know! But he's not embarrased by this). His "library" is thus a bit, shallow, and reflects his interests: cars and rifles and such. He has other books that serve as a kind of wallpaper. Since I am at his house now, and needed a book to read, I went with the wallpaper: volume 40 from the Britannica Great Books of the Western World series, volume 1 of Edward Gibbon's, The Decline and Fall of the Roman Empire.

All my reading life I have been seeing these nods and genuflections and references to Gibbon so, I thought, here's my chance. Three nights of reading have gotten me to page 7 (see above). You can probably guess why.

Well, if you are guessing it's because Gibbon is boring that's not right. But he demands concentration - that kind of concentration that you have to give to foreign language tapes if you're actually going to learn how to ask for a kilo of grapes and where is the emergency room - the kind that puts you to sleep. Focus! Focus! zzzzz.

I am actually in awe of the writing, though. No one writes like this anymore and while that may be a good thing for keeping the pages turning and film adaptations that can get Russell Crowe into a short tunic, I admire it. A lot.

I read this little sentence yesterday, about the political sequence in Rome at the time of the conquest of Britain:

After a war of about forty years, undertaken by the most stupid, maintained by the most dissolute, and terminated by the most timid of all the emperors, the far greater part of the island submitted to the Roman yoke.

Not for everybody, I suppose, but I think it's great. I also like the way he encapsulates the reasons for the defeat of the native Britons:

The various tribes of Britons possessed valour without conduct, and the love of freedom without the spirit of union. They took up arms with savage fierceness; they laid them down, or turned them agains each other with wild inconstancy; and while they fought singly, they were successively subdued.

Talk about burying your lead! The Niblet is home. He's lovely. My brother asked me to handle a 6 AM feeding (based on a schedule they worked out at the hospital). I agreed, of course but added that the Niblet was unlikely to stick to a schedule. "When he wakes up and cries, feed him." My brother said, "he's used to getting fed at 6 AM." He set an alarm for me and I got up at 6. It has been all silence in the room of the little family since then and I have been reading blogs. Oh wait! I hear crying. Bye!
Posted by Kim Velk at 8:23 AM 8 comments: