(Sorry to go all autobiographical on you but this happens when one goes to one's old hometown...)
I am at a borrowed computer some five hours from the Last House; my Dad's computer, to be exact, at the home he shares with my Stepmother and their two terriers in Albany County, New York.

I was born a few miles from where I now sit, back in darkest 1965. I entered this world at the Albany Medical Center Hospital, where my 23-year-old mother had recently completed her nursing training. I was Kid 2 for my (unbelievably) young parents (Kid 1, my sister, is two years older). Dad was working on his PhD at RPI in nearby Troy, New York when I arrived. After he finished that (still in his mid 20s) we moved to Syracuse, New York so Dad could work with General Electric there. We all came back to the Albany area, however, when I was nine and Dad took it into his 30-something head to go to medical school. (It was one tourist hot-spot after another for our family!) He chose Albany Medical Center (I remember visiting New York University, another place he was considering, but someone told him during his interview he could never afford to send his kids to private school in NYC and he wouldn't want us in the public schools). So, back we came to one of the amorphous suburban towns that characterize this part of New York state.

Dad did his MD and continued to work for GE, like about half the dads in the "town" where I then grew up. (Niskayuna, New York). Town is in quotation marks because Niskayuna is, and was, mostly a collection of subdivisions with a few old farms near the Mohawk river: no main street or town center to speak of. My parents split up when I was 12 and Dad moved to downtown Schenectady; a place with a real identity (even if it is mostly as a gag line for old Vaudevillians). I spent a lot of my growing up years in the midst of this iconic rust belt town and it will always have a place in my heart. It is different now, as I discovered again driving around today. I think it is both worse and better than it was when I was hanging out with Dad in his various apartments in the historic part of the city called "the stockade." There are some new buildings downtown, including a big movie theater, (the downtown peaked around 1940), but there are more scary people, too. GE is still here; toujours GE.

I dragged the kids on a tour around the Old Lady today; pointing out, like a budding old person myself, where we had the ceremony when I graduated high school; the bookshop me and Grampy used to go to all the time; a building that isn't there anymore where I used to work. They appeared to be mildly interested, but not very. A guy on Erie Boulevard in a hotdog suit holding a sign for Dinky Dogs was a much greater source fascination than any landmark I tried to explain. I don't fault them. 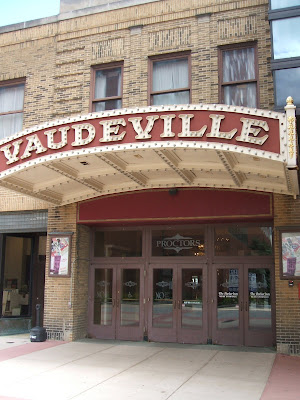 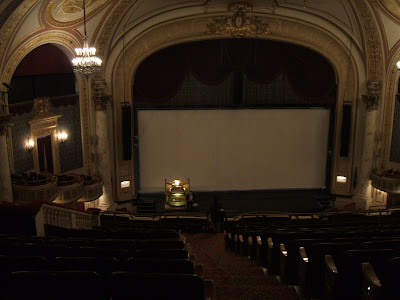 One of the old glories of the town, Proctor's Theatre; a survivor from 1926.

You can't go home again and I don't want too. (Thank You Know Who for Vermont!) But may You Know Who bless old Schenectady as well. As during my whole childhood in the 70s and early 80s, it is obvious that Schenectady still needs all the help she can get. For those who are trying, really trying to lift the old broad up again, and those who have kept faith with her all dark years; I salute you. Loyalty counts for a lot.
Posted by Kim Velk at 10:41 PM No comments: