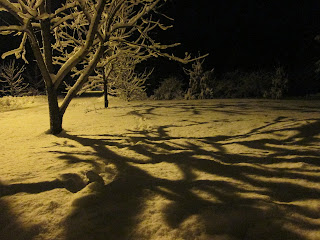 I was just sitting here at the Last House, minding my own business, watching American Pickers with Shackleton, when I looked out the window.  One of the oddities of our old farmhouse in the middle of nowhere is that we have a streetlight just outside.  Whusband planted these Walnut trees a couple of years ago and the best thing about them so far is the shadows they cast in the snow.  Bedtime!
Posted by Kim Velk at 11:18 PM No comments:

Email ThisBlogThis!Share to TwitterShare to FacebookShare to Pinterest
Labels: vermont

I have neglected the ol' blog shamelessly lately.  In my defense, I have been devoting all my free time to finishing That BOOK - mentions of which have been tantalizingly sprinkled here from time to time.   It is in proof form now, and under the final scrutiny of a few readers, including me.  No one is giving it a free pass, including me.  Fingers crossed, release date will be within the next few weeks.  Here's a picture that is related to the story.  The picture is intended to tantalize further and to break up this long post. 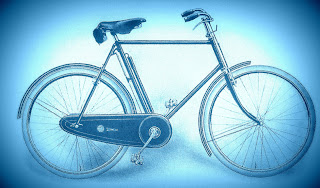 Bet you're dying to find out what THAT's all about, aren't you?

Well, I will have the trumpeters up on the battlements and the banners, which are now being printed at the local UPS store, unfurled the very moment that you will be able to get your own copy.  The book is titled Up, Back, and Away, for your near-future reference.  (It had a different working title for the four and a half years of its gestation, but it occurred to me one night recently that I ought to check on whether anyone else had used MY title.  Two people had, and in the not very distant past.  You can't copyright a title but I didn't want to share and I am sure those who had already occupied that title's ground would feel the same).

In the meantime, when I am not editing and correcting my own writing, I am reading that of others.  When I read, I am after entertainment, uplift, wisdom and, whenever possible, Towering Genius.  That last criterion need not be met every moment and it's probably best that it isn't.  It would be like trying to live on lobster.  Still, I admire it so much when I see it that I am sometimes compelled to come here and share a passage or two.  I have done so over the years with bits pulled from  Siegfried Sassoon, Edith Wharton,  Thomas Hardy and Somerset Maugham.  Maybe I'll go back and tag those posts so those (very few) of you who might be interested can find them easily.  (And then, I have a book to finish so maybe that won't happen right away - you could find them without too much trouble in the search box.)

In the last week I have read a couple of essays by living Towering Geniuses.  If you follow along with literary goings-on, you probably have already heard about the Hilary Mantel essay in the London Review of Books, "Royal Bodies."  I have long admired Hilary Mantel, without giving her my heart.  That is, I am in awe of her writing, but she's almost too smart.  She's scary.  (I put A.S. Byatt in this camp as well.  Geniuses who are not natural smilers).  My esteem for Mantel's virtuoso powers was just elevated to new heights AND I also warmed to her after reading this essay.

If you're not up for the whole thing right now (it's longish and not all easy sledding), here's a little excerpt that I found particularly captivating.  It loses from being pulled from its context so I'll fill in just a bit.  Mantle is speaking here of a reception that she attended at Buckingham Palace, complete with an appearance by the Queen.  Mantel had discussed in an earlier (gorgeous) paragraph the strange world of the modern royals, who are always a sidelong glance away from the stacked chairs and other banal stage craft that accompanies their public occasions.


Now flunkeys were moving among us with trays and on them were canapés, and these snacks were the queen’s revenge. They were pieces of gristly meat on skewers. Let’s not put too fine a point on it: they were kebabs. It took some time to chew through one of them, and then the guests were left with the little sticks in their hands. They tried to give them back to the flunkeys, but the flunkeys smiled and sadly shook their heads, and moved away, so the guests had to carry on the evening holding them out, like children with sparklers on Guy Fawkes night.
At this point the evening became all too much for me. It was violently interesting. I went behind a sofa and sat on the floor and enjoyed the rest of the party that way, seeking privacy as my sympathies shifted. And as the guests ebbed away and the rooms emptied, I joined them, and on the threshold I looked back, and what I saw, placed precisely at the base of every pillar, was a forest of little sticks: gnawed and abandoned. So if the queen’s glance had swept the room, that is what she would have seen: what we had left in our wake. It was the stacking chairs all over again; the scaffolding of reality too nakedly displayed, the daylight let in on magic.

Of course it's a brilliantly expressed and very interesting deeper-meaning-of-it-all observation, but equal to the toothpicks, the image that struck me was of gnomish, little-and-big-all-at-once, Hilary Mantel sitting behind a sofa at Buckingham Palace.  I guess I'll have to love her for that.  Could it be true that she did such a thing?

My second wonderful encounter with a modern English-language maestro came just this morning.  I finally got around to glancing through the March 7 issue of the New York Review of Books.  (I know March 7 has not yet arrived, but the NYRB has already been fluttering around here for days).   Checking the table of contents this AM, I found that Michael Chabon had contributed an essay called "The Film Worlds of Wes Anderson."  I'm a big Wes Anderson fan, and I knew that I had heard of Michael Chabon - I must've seen his name in the NYRB and other places over the years.  (I believe I have had him confused with the actor Michael Gambon. I know, but that's how my brain works these days).   Anyway, I read the first few paragraphs and my jaw dropped.  The NYRB has made this bit publicly available on its website, along with the next few paragraphs.  After that you have to pay if you are not already a subscriber.  I think you'll find it worth the money.  Here is Mr. Chabon's opening on his Wes Anderson essay:


The world is so big, so complicated, so replete with marvels and surprises that it takes years for most people to begin to notice that it is, also, irretrievably broken. We call this period of research “childhood.”
There follows a program of renewed inquiry, often involuntary, into the nature and effects of mortality, entropy, heartbreak, violence, failure, cowardice, duplicity, cruelty, and grief; the researcher learns their histories, and their bitter lessons, by heart. Along the way, he or she discovers that the world has been broken for as long as anyone can remember, and struggles to reconcile this fact with the ache of cosmic nostalgia that arises, from time to time, in the researcher’s heart: an intimation of vanished glory, of lost wholeness, a memory of the world unbroken. We call the moment at which this ache first arises “adolescence.” The feeling haunts people all their lives.
I looked up Chabon at the front of the magazine immediately and learned he had recently published a book called Telegraph Avenue.  I'd heard of that, I realized. It made a big splash that I had only distantly registered. Of course now I am going to have to buy or borrow it.
OK.  That's all I have for you today.   I now face the melancholy task of going back to my own dim prose having stared at these bright lights a little too long. Oh well.  We can only do our best.
And, in case you were wondering, I don't really have any banners being printed up at the UPS store. Who would do that?  Maybe someone with the confidence to sit down behind a sofa in Buckingham Palace while the Queen of England was circulating.   I remain in active negotiation with the trumpeters, however.  Don't stay away too long.
Also, by the way, the banner today is a picture I took of my father on our recent trip to NYC.  We waited together in the freezing cold at the TCKTs booth in Time Square twice last month.  I think I snapped this picture right after we had secured tickets for "The Other Place"(q.v.)  Dad is the one who has subscribed to the NYRB for me for years.  I am glad he brought his hat on our trip. 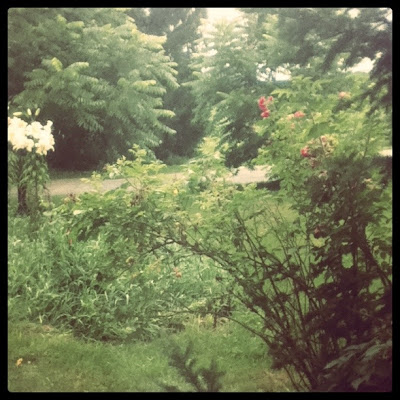 My daughter took this picture in the front yard of the old farmhouse last summer.  Remember, summer?