The Fair! The Fair! 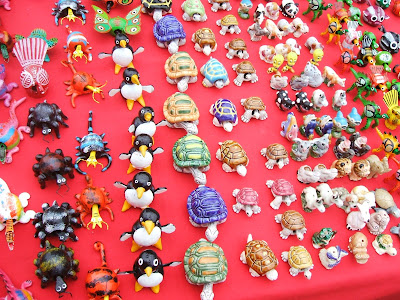 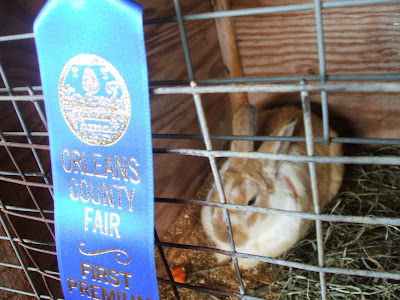 Kid 1 and Kid 2 and I went off to the Orleans County Fair today, the opening day of the Big Event. The fair takes place every August in nearby Barton, Vermont. It's a real agricultural fair, though it also includes all the rest of the income-generating fair claptrap as well, naturally. Because it's still small, and out of the way, and run by local people, it has some genuine charm. I didn't even so much mind the bail jumpers, ex-cons, and assorted traveling folk who man the rip-off skill games and barely-bolted together thrill rides. The animals and the farmy stuff (tractor pulls - ox pulls, we saw both) were the high points. Today's banner is a table-full of wee bobble heads that were on offer just south of the usual fried dough/cotton candy/funnel cake/ Italian sausage gauntlet. We looked at the bobble heards, I photographed them, Kid 1 demonstrated the bobble head action (see the video below) and then we moved on. Here's some more of what we saw today. 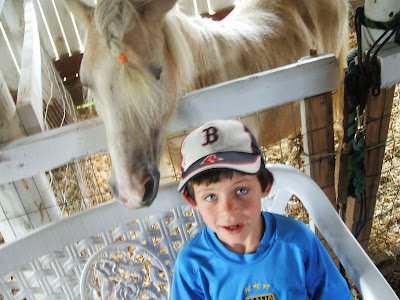 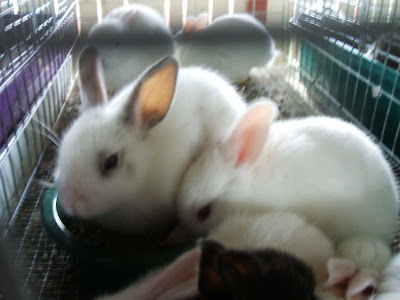 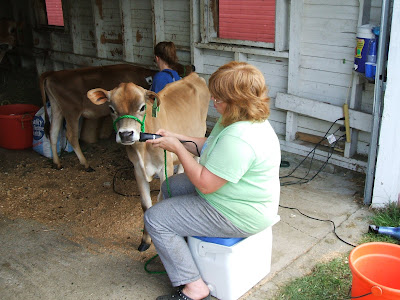 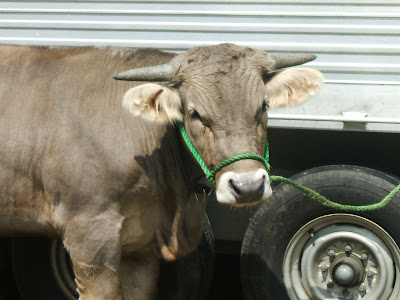 Look at the faces of these cows. Surprised by beauty... And how bout this guy? More dignity than a cage can contain. 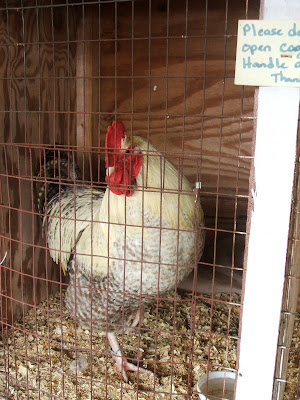 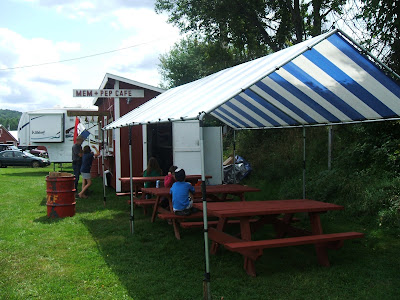 We had lunch at this little stand that was down by the barns. I have seen it here in previous years. The burgers were good and served by a high school kid from the local Christian school. (The stand is a fundraiser for the school). He was very sweet - obviously just learning the hamburger selling routine. This stand is called "Mem and Pep" which gives me a chance to do a little Vermont cultural interpretation for you people from away. French Canadians call their grandparents "Memere" and "Pepere" - sometimes shortened to Meme (two syllables, i.e., muh-may) and Pepe and sometimes Mem and Pep. Needless to say there are beaucoup Vermonters in this part of the state who are descended from French Canadians. There are still a lot of middle aged people around here who spoke French at home growing up. The people from whom we bought the Last House, the Bouchards, were an example of this. Even a few generations down the line, when the Vermont kids don't know any French "Mem" and "Pep" survives. This nice kid explained to the guy behind me in line that they hadn't figured out how to turn out the fryolator. It was the first day of the fair, afterall. 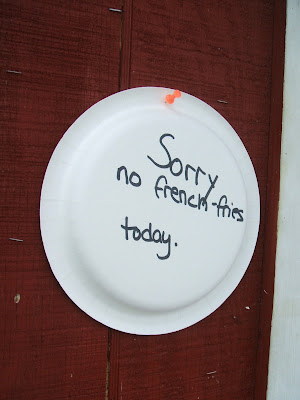 We spent a few minutes in the grandstand, a wooden structure that looks like it was built a hundred years ago of kindling wood. Smoking is strictly prohibited in the grandstand and this is an excellent thing. One cigarette butt and, one could imagine, poof - spectator barbecue. 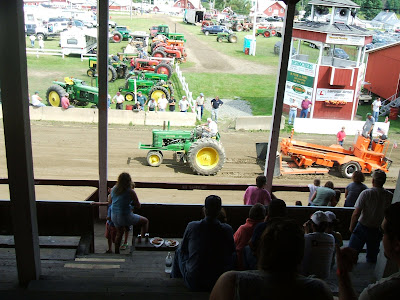 I was so impressed to see the way the guys handled their tractors. The ox pull was even more amazing. Could you get oxen into a yoke, march them into the ring, back them up to a sled and get them to pull it? I know I couldn't. These rural competencies don't get the respect they deserve. The tractor pull was loud though, too loud for Kid 1 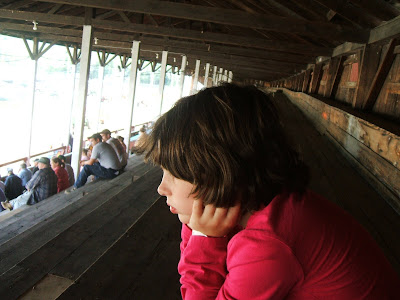 Colorful locals, and their tractors and RVs, much on display. 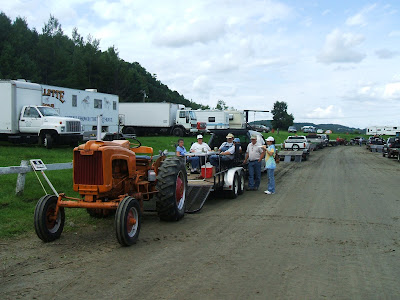 We ate one bag of cotton candy (kids did - I can't face it); I did have piece of fried dough and Kid 2 and I had a maple creemie (Vermont soft ice cream) at the Maple Sugar house. Once a year for fair food... 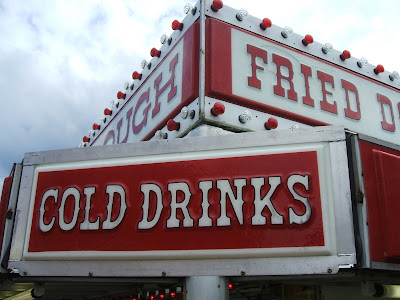 Today's admission allowed unlimited access to the rides but, having told the Kids yesterday that I didn't trust the safety of these travelling midways, and because they were generally freaked out by the hawkers of the games and the scary tatooed people, loud music etc. they wouldn't get on anything but the merry-go-round. This is uncharacteristic, especially of Kid 1, but I wasn't going to complain. I wasn't riding on anything, Lord knows. Just before we left for the day we had a little encounter with the Hurdy Gurdy Man. I always wondered what a "hurdy gurdy man" was. I think the only place I have ever heard of one is in that trippy '60s song by Donovan. The orangutans on the back of this gentleman's little car waved an American flag (mechanical orangutans, I hasten to add). Doesn't he look like a nice man? What a face. 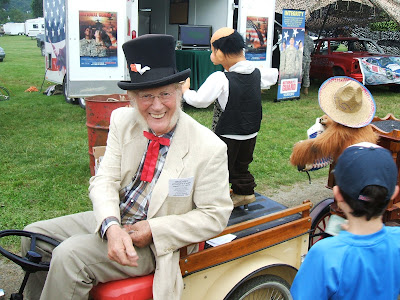 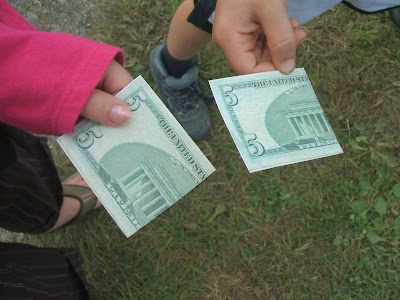 But, oooops, can you believe it? They weren't real money! Is a county fair a place for this kind of chicanery? It turns out the back was printed with some semi-cryptic religious message, compliments of the Hurdy Gurdy Man. Kid 1 said this fake fiver was the best thing about the whole fair. 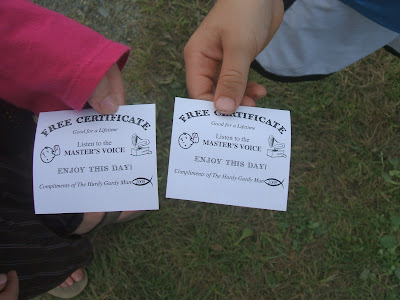