Two or Three Things I Know About Myself 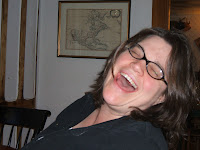 The Sources of Longing?

When I was in fourth grade I read a book about a family that included four children, their father, and a housekeeper of the warm-and-wonderful ilk. The story, as I recalled, was mostly about their move from a city, which must have been New York, to a quirky big house in the country and their adventures there. The only detail I had well in hand at this far remove from fourth grade was that the house had a cupola. I think I learned the word "cupola" from reading this book. I also remembered that it had the word "four" in the title - four story something or other as I recalled.

Thanks to the wonders of the internet, my book search for "Four Story" turned up the book, The Four Story Mistake by Elizabeth Enright. The internet again (through AddALL used book search, which is the best book search engine out there) served up a copy exactly like the one I read, lo those many years ago. It turns out it has been reprinted recently, but I got an ex-library version of the 1942 edition from the Mid-York Library system in Utica. This was a nice touch since I would have read the book in Schenectady which is pretty much the same thing as Utica, only ninety miles east.

I, nominally, bought the book for Woolfoot Girl, my daughter, who is now nine. Though she has become quite a reader, she hasn't dived into the Four Story Mistake. I think she may have been put off by the 1940s illustrations, by the author. The reprint has more up-to-date illustrations but, of course, I think that is a charm-killer. I, of course, read it again the night it came in and I think it was as good as I remembered. It also brought about one of those moments of self-revelation that made me thing, "I must Blog about this."

The Melendey Family, who occupy the four story mistake, have lost their mother. (Why so often does the mother have to die? Disney killed her off in just about every one of his classic movies). The substitute is "Cuffy" the warm and wonderful working-class substitute housekeeper/nurse/family retainer. Mr. Melendey has an undescribed job, somewhere in New York I guess, that provides sufficient means for the Four Story Mistake, four children, Cuffy, and a "furnace man" called Willy. (I think that's right and I am not confusing this with the Simpsons).

The story involves the adventures of the children in an old country home, built in the 1870s by a rich man with many children who ran out of money before he could put a proper fourth story on his big house and had to finish off with a cupola instead (hence the title). The oldest girl in the family about 14, is a talented actress, who actually gets a role in a radio drama before the story ends. The oldest boy is a talented pianist. The younger children have scrapes and adventures. They put on a show to raise money for war bonds and people come from New York and the village and it's a huge success. The family is given an alligator as a pet by charming local eccentrics. They discover a secret room. You get the picture.

Rereading this at age 42 I realized that this was the life I wanted - really still want. We lived in subdivisions when I was a kid. No alligators. No family retainers. No secret rooms. No cupola. I was thwarted. Reading the book reminded me of an episode from about 8th grade when my mother's suitor talked of buying an old house in an old upstate town. (We did divorce in the 70s, less harsh than death, I guess). It had a cupola. I was not supportive of the suitor at that point but I loved the idea of that old house. Which came first, I wondered, upon rereading the book, some inborn desire to live the Melendey life, or did the Melendeys plant the seed of desire which has been germinating ever since?

I had a similar experience a few years ago when I rented the DVDs of the BBC miniseries To Serve Them All my Days. This is the story, by R.F. Delderfield, of a working class Welshman with a love of learning who gets a job after World War I at a tony English boarding school. The Welshamn's war wounds (shell shock) are slowly healed and he grows into headmaster over many decades. I Loved It. Watching it again a few years ago I wondered if this wasn't a major contributor to my anglophila which is, I recognize, sort of ridiculous for a person in my generation and in rather bad taste. No wonder when I went off to college (at SUNY Binghamton) I was so disappointed by the pedestrian state university commonplace boringness of it all. Stained glass! Stone! Hymns! That's what I wanted. This kind of thing.


McGill, which was largely constructed by those pre-war British colonials showcased in To Serve Them All My Days was sooo much more congenial for me. The Molson Gym was a World War I memorial to a scion of the Molson family who died in WWI. It had his memoribilia in showcases. The stuff could have belonged to David Powlett Jones (the main character in To Serve Them All My Days). I cann't really reduce the source of my longing for all the British trappings (claptrap?) (certainly there are many) but I think this was clearly one of them.

In other news, the snow is falling - still. We must have two feet of new snow on the ground up here at the last house. Woolfoot girl just came downstairs and is on the other computer checking out the new Spiderwick book (why didn't I write those, dammit!) I am going to force her out of the house in another hour to check out the powder at Jay Peak. A Sunday blessing on you all.
Posted by Kim Velk at 6:11 AM No comments: