I paid $4.95 at 10 last night to watch The Artist on pay per view. (That's the silent film about the affair between two actors on opposite sides of the talkies divide that won the best picture Oscar this year). At around 11, as I was trying to catch my breath, so full of admiration was I, Maisy hopped up and started barking at the curtain. I knew this meant she had seen a mouse. The new house has a mouse issue. It's a regular Tom and Jerry situation. In my little office there, I found a pile of dog food neatly piled beneath a corner of a bookcase, not twelve inches from my chair. I opened the door to the porch one night and a mouse ran away from the front door. That is a bold mouse. I mean, yes, he ran away, but he was obviously planning on coming through the front door.

All right - I did't actually see the mouse that interrupted The Artist or I might not have survived to write about it here. It was more a psychological attack, as far as it went. But since it was late and I couldn't risk being physically attacked by the mouse, as the mother of school-aged children, I fled to bed with a plan to get the DVD from Netflix or something eventually. I am sure you will be cheered to know that this frightening tale has a happy ending. When I turned the TV on this AM, incredibly, The Artist was still on and it at exactly the point in the movie where I had retreated to my bedroom. LOVED it. What fetching stars! What beautiful photography! The cars! A terrier! We were late for Shack's guitar lesson but he and I were transfixed. See it if you can.

I figured out yesterday how to do a "hastag" topic on Twitter. My proposal was for "#cutofftitles"
E.g., "The Davinci Cod, The Sound and the Fur, The Good Ear, Papa's Got a Bra" You get the idea. In doesn't seem to have caught on - the theory is anybody can jump in on these topics. I am still hoping for a few more contributors so if you have a good cut off title, please share. Bon weekend!
Posted by Kim Velk at 6:51 PM 2 comments:

What Happened to Saturday Night?

I got wondering about that as I sat down here (after dinner on Saturday) with nothing better to tell than that I have been reading Paradise Lost aloud to myself in stolen moments all weekend and that I am looking forward to another hit of Milton at bedtime. That would be 10 PM. If I make it that far. Also, Milton will be my only company... 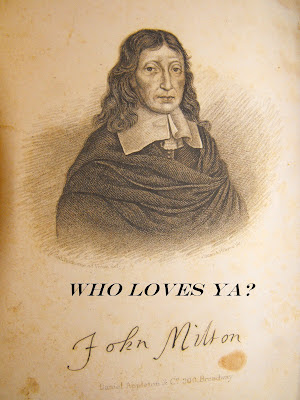 
I wonder what my 23-year-old self would make of my current existence?

I got a little consolation from Yeats. (Better and better isn't it?) Not for me these days those "dying generations at their song." I'm off for "monuments of unaging intellect": e.g. Milton.

Really, it could be worse.

O HEART, be at peace, because
Nor knave nor dolt can break
What's not for their applause,

Even Yeats wanted applause! He felt shabby about it and manages in this poem to talk himself around. Luckily for him, and the English-reading world, he had a muse who got booed offstage and didn't apparently care.

[...] what her dreaming gave
Earned slander, ingratitude,
From self-same dolt and knave;
Aye, and worse wrong than these.
Yet she, singing upon her road,
Half lion, half child, is at peace.

Not that I think of literary agents who have had said "no thanks" to me as dolts and knaves. (Well, maybe the ones who include helpful tips on how to write in their canned responses). I'll leave that to the judgment of future generations.

We have dragged the washer and dryer (the ones that sat in the barn of the Last House for twelve years) up three flights of stairs here at the new house, plugged them in (this was harder than it sounds since a new standard in dryer plugs came into being during these 12 years); we have just fetched the Understudy's new mattress and box spring from the lowest-end of big box stores (tied to the top of the van, natch) and hauled them up the same three flights. And that is that. No more. Next time I move it is going to be feet first and in a box that someone else is carrying. 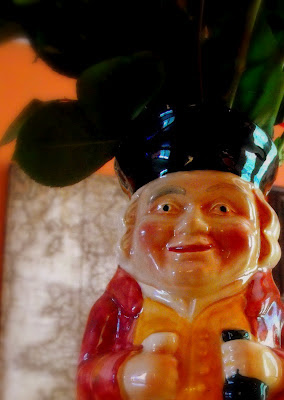 In other news, we attended two graduations this week. Shack finished fifth grade and elementary school (yes, there is a ceremony for that these days). The Understudy finished eighth grade and will be starting high school next year. Cue ceremony. This is a once in a lifetime congruence in our little family, with both kids moving on to the next level at school. Sigh. They will be participating in a neighborhood production of Fiddler on the Roof next week. Everytime I hear "Sunrise, Sunset" I burst into tears.

On a lighter note, school, the learning part of it at least, has basically been over for a week. Today, the Understudy and her class took a bus to an amusement park two hours away. She returned home at 7:30 PM sun burnt and cranky. Shack and his classmates had a picnic and then swam the afternoon away at the local indoor swimming pool. My favorite moment of the day came when I picked him up from the elementary school, for the last time ever.

Me: How was swimming?

Shack: It was great! I invented a new game, "handcuffed swimming,"

Sometimes I wish he would never change.

If you have kids and haven't cried about it lately, here's one for you.

Whew. Well I am glad I got that (see the last post) off my chest. The world seems not to have noticed, as usual. Hardly surprising, given this weenie little platform I'm on but, in the immortal worlds of Jessie J., around here, we just want to make the world dance. Well. Whatever.

I have made a few happy discoveries on Twitter, as previously noted, and this being a lazy sort of Sunday (more furniture moving in store tomorrow, never fear) I wanted to share a few Twitter riches.

One of the guys I follow - a Vermonter whom I haven't yet had the pleasure of meeting - introduced me to a the "#terriblesequels" space on Twitter. Here are a few of my favorites:

To Stuff a Mockingbird

I contributed (or attempted to contribute - I am not sure if they showed up):

Another funny thread got going this morning. It was called #bloombergmovietitles and my Twitter friend suggested "The Wizard of No More than 16 Ozs" which I thought was pretty funny. There was other good stuff to. Unfortunately I am learning the hard way that some tweets are ephemeral. The thread is now, apparently, gone. I found this while searching for it though, "Mayor Bloomberg will be the first man to go down in history in favor of smaller cup sizes."

So, the internet isn't all bad after all. Hope you all had a nice weekend.
Posted by Kim Velk at 7:13 PM 2 comments: