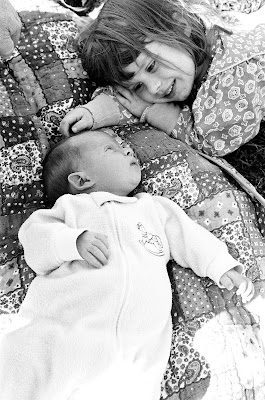 The two who changed my status so absolutely and irrevocably and so happily, as they were around this time of year in 2001. 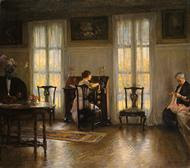 It's Mother's Day but I'll try not to go all banal on you. I picked this particular painting to show you (thanks to our National Gallery) because it wasn't Mary Cassat or Whistler. (Not that there's anything wrong with them, but I didn't want a picture that might have been co-opted at any point along the way by Hallmark or a museum gift shop as a Mother's Day card). I love what this one suggests about Motherhood, (capital "M" is intentional). It doesn't end when children get old enough to become company. Being a mother is, I have realized, my life's work. Having a mother, and trying to think about her and her contributions to all that is, is like trying to be objective about the existence of air and water. Sine qua non and all that. So, a bow today to to my mother and all mothers.

More Art from the Woolfoot Collection: A Painted Boy Like My Boy 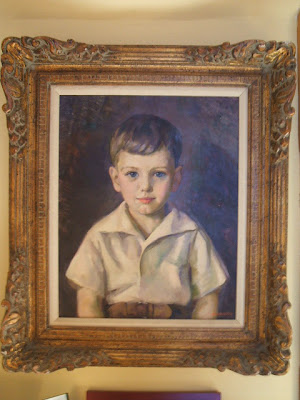 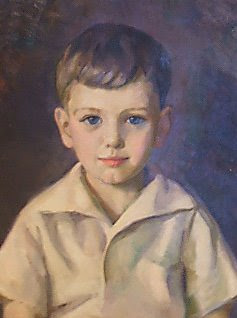 Today's the day to post this image of my favorite painting. I bought it in a heartbeat when I saw it in an online art gallery about two years ago; of course I couldn't afford it (paid just under $500) but I had to have it because it called to me. It is marked on the stretcher, "Buddy 1940." Buddy, as we say in our house, does not look exactly like Kid 2, but the two boys look like they could be brothers. It was painted by the American artist Marian D. Harris. Here's the bit of bio on her available for free on AskArt.com:

"Buddy" had passed through the hands of Freeman's Auctioneers in Philadelphia before he got to the retailer from whom I acquired him. (I researched the painting post purchase, of course). I don't think you can now acccess the archived catalog of the Freeman's sale of the work of Ms. Harris. There was a lot of it and I liked a lot of it, though none went to my heart like this one. I expect that a friend or or a family member of hers died and a whole passle of her paintings went on the block, where they sold quite cheaply. About a year or so after I got Buddy a Harris painting called "Janey," in a very similar frame, appeared on Ebay. Janey, to my eye, was not nearly so fetching as Buddy. I didn't bid but I did correspond with the eventual buyer. (She paid very little, maybe only about $100-$200, which would have been a cheap price for the frame alone). I think Buddy and Janey were sold as a lot by Freemans for under $200 - and "Janey" was the one that appeared in the catalog. I think if they had featured Buddy they would have done better.

The real boy and girl are clamoring for me to open the barn so they can drag out all the toys I tried to get rid of last fall. (WHusband instead insisted they be saved and stored in the barn.) Oh well. The joys of Motherhood.

By the way, I found the other cup. I had put it in the cupholder in the minivan! What good thinking. Here are the two of them, together again, as they have been since 1880. 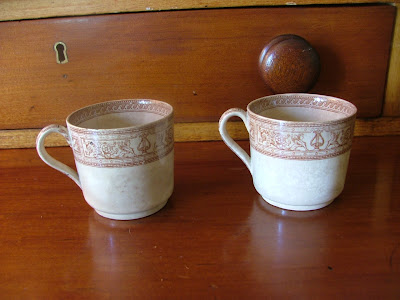