Yesterday I went out early in the morning to buy groceries. Can you believe that just a minute into my drive a black cat - coal black, mind you - no white paws or forehead blaze to drain off some of its bad luck, raced across the road right in front of me? No damage to the cat, but I was the first car through after she passed. There was no intercessory person to pass before me, to bear the brunt. I had seen the self-same cat the day before and had been relieved when it dodged right as I approached, thus not crossing my path. But no such luck yesterday. So, there I was, was facing an entire day - Mother's Day, no less - marked by black cat crossing right around the time the sun came up.

All right. The Understudy brought me cinnamon rolls when I woke up from the morning nap I had to take as a result of getting up so early. That was good. The Polaroid pictures that the kids and I took, however, at three dollars a piece, were almost a total loss - and I thought about that cat. (My favorite is the banner today). I worried a little all day. To wit: as I was mowing the lawn at the new house last night for the first time - a "lawn" that consists of a cliff joined to an incongruously rocky swamp - I worried that I might cut my foot off trying to wrestle our ancient push mower. (Maybe the bad luck is that 15 years after graduating from law school I still have to wrangle lawn mowers up hills?) 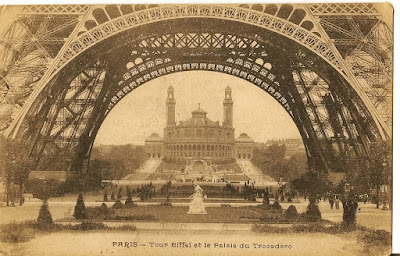 Today, however, a little red-breasted bird flashed by the front of the car as I was driving the kids to school. It made a nice acrobatic little flourish as it skirted my grill. In my own susceptible mind, I decided this must presage good luck. It is a day off (I work part time, which is why I can't afford to have someone else cut the grass on the cliff and in the swamp). When I got back to the house with a list in my head of a million things to do, I sat down in front of the TV to gulp a bowl of cereal before I started on the list. Driven from the morning news show by a man who was vacuuming a cat (I am not making that up - the cat was fat and not black), I landed on our free trial of HBO. Woody Allen's 2010 movie "Midnight in Paris" was just starting - as in, opening montage of Paris scenes.

I had seen the reviews, which were good and which had made me want to see it, et voila! It stars Owen Wilson who is always so winning, and also Paris. Didn't Tina Fey say it best? "I want to go to there."

Even better for me is that the movie is about (partly) the 1920s. Allen's sketches of Hemingway, the Fitzgeralds, Dali, Picasso, Gertrude Stein, are made with very broad strokes - of necessity I expect, given that most Americans can't find the U.S. on a world map that isn't labled, much less do they have any idea about Dali and T.S. Eliot, but I was grateful to see them at all. As a few of you know I wrote a book (which is laying around in a great lump at the moment) which features time travel and life in England in the 1920s. So I was just thrumming along with the Wilson character. His dilemma is whether he should remain in Paris in the 20s - a time to which he is magically transported by the most gorgeous 1920s automobile I have ever seen. And of course Woody Allen always photographs his beloved cities so beautifully.

So, there you have it. A black cat undone and the promise of a red-breasted bird fulfilled. I guess today is the day to hang some pictures and set up the heating oil and propane contract for the new house. Fingers crossed.
Posted by Kim Velk at 11:45 AM 2 comments:

Email ThisBlogThis!Share to TwitterShare to FacebookShare to Pinterest
Labels: Superstitious Nonsense - Or IS it?
Newer Posts Older Posts Home
Subscribe to: Posts (Atom)