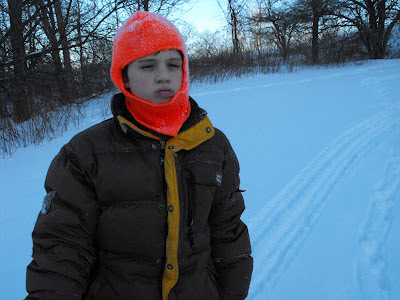 Shackleton asked me to get him some cereal the other day (I think at nearly 11 he's getting a little old to be treating me as the waitress around here - note to self). Anyway, as per my instinct to serve him food on demand, I asked where the cereal might be found.

Email ThisBlogThis!Share to TwitterShare to FacebookShare to Pinterest
Labels: shackletonisms.

February Is Better Than January

At least today. We had some fresh snow - just a dusting to cover the ice and the icy snow, and then some sun. Winter's perfect combination. The sun is different now, gathering a little strength. I dragged Shackleton out to the hill behind the farm house for a little flexible flying. Here's the most epic run yet - all the way from the back of the barn to the bottom of the field where the stream runs!

In other (utterly unrelated) news, I rented "The Haunting" from Netflix a week or two ago and sat down to watch it last night. I remembered seeing it as a teenager, and it made an impression. As I was racking my brain at my Netflix queue one day it popped back into my mind. No wonder I remembered it. It was directed by Robert Wise from a story by Shirley Jackson (none of this would have registered on me at 16). As the opening credits rolled I caught one that noted "Claire Bloom's Wardrobe by Mary Quant."

What a promising start, I thought. It is a fun movie - despite the frantic performance by Julie Harris, but she had a hard part to play - all coming apart at the seams and frustrated spinster and all. 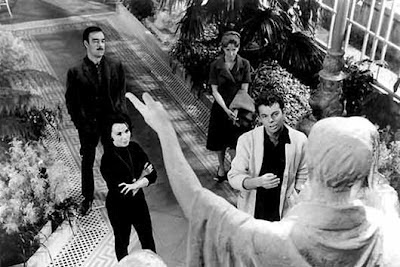 The creepy statue was a weak point. It looked like papier mache. The scary house was otherwise pretty effective - at least as photographed by Wise.

You can see why I tagged this post as "nothing really." Thanks for stopping by, though.
Posted by Kim Velk at 5:33 PM 3 comments: