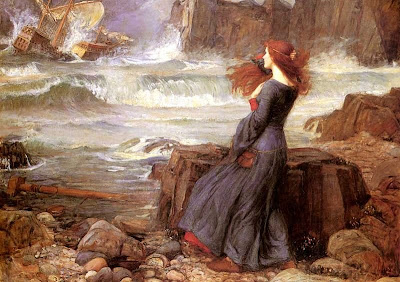 We had theater tickets both nights this weekend!
Weellll, before you suffer a pang of jealousy or wonder at the social and cultural swirl that effervesces around us here on the Vermont side of the Canadian Border, the tickets weren't exactly for Broadway. We were headed more off Broadway, like off in a school cafeteria. Our tickets got us seats at the lunch tables (thankfully, these can be converted into benches) to see two performances of Shakespeare's The Tempest, as enacted by the middle school students at the small Catholic school attended by the children of the Last House.

Our own little girl, (known on these pages as the Understudy) made her theater debut as a Sprite. 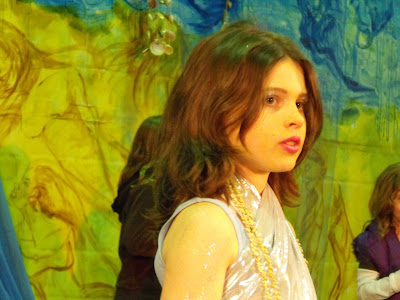 The Understudy On Stage as an Otherworldly Creature

The director of this production, an extremely dedicated woman with a history in professional theater, reinterpreted it some, but all the poetry was there. The kids all hit their marks, every speech was delivered, the story was told again and credibly. Oh, the effort involved!

I haven't gone back to the actual text to see if Sprites were an, hmm, "innovation" for a middle school production (where the casting director needed to find a few parts for fifth grade girls), or if they are creatures of Shakespeare's own invention. Somehow, either way, I like to think he would have approved of having 11-year-olds appear in silvery togas to do a dance, and to move the plot along by doing the bidding of Prospero and the island gods.

Both Whusband and I were surprised to find that sitting through this version of The Tempest was not at all a chore. Maybe now that I am well into my 40s, I am finally ready for Shakespeare. Maybe I would have liked it better and understood it more all along if I had watched it acted live by school children. 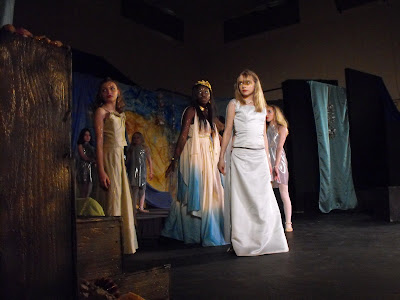 In any case, I can honestly report that this was my best experience of Shakespeare to date, and not just cause my kid appeared in brief flashes. It was a pleasure to see it played and to hear it spoken by these earnest young people. As I shifted on that hard bench (in a darkness achieved by taping cardboard over the windows) I was reminded of Frank McCourt's reminiscence of Shakespeare in Angela's Ashes . He wrote about how, when he had been hospitalized with a near-fatal illness as a kid, he heard, or read, some lines from Shakespeare while he was convalescing. He said them aloud, over and over, not really knowing what they meant, but because he found them, "like jewels" in his mouth.

The Director of the school version rejiggered the famous speech delivered at the end of the play by Prospero, a character originally played by Shakespeare himself, in his final performance in his final play. She moved this bit, which appears in Act IV Scene 1 (as I just learned) to the end of the play and integrated it with the rest of the speech made there. Prospero, after the action is done, addresses the audience not as Prospero, but as Shakespeare (or so we were informed). Whether this is exactly correct, I don't know. I think the lines fit very nicely at the end of the play and I have been pondering them since I heard the 14-year-old Prospero speak them twice over this weekend. Here they are for your consideration.

These our actors,
As I foretold you, were all spirits, and
Are melted into air, into thin air;
And, like the baseless fabric of this vision,
The cloud-capped towers, the gorgeous palaces,
The solemn temples, the great globe itself,
Yea, all which it inherit, shall dissolve,
And, like this insubstantial pageant faded,
Leave not a rack behind. We are such stuff
As dreams are made on, and our little life
Is rounded with a sleep.
Posted by Kim Velk at 9:49 PM 6 comments: