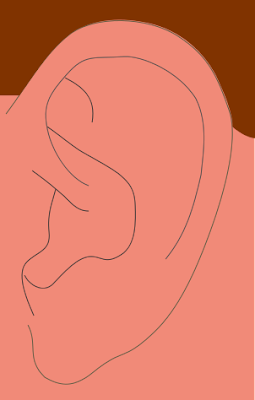 (Ear image courtesy of Wikimedia)
I'm just in from a session on the Cub Cadet, grooming the Country Club-like acres of grass around the Last House that W-Husband as decided we need to cut. I was also listening to my iPod - or trying to listen. The lawn mower makes for a poor audio environment, naturally. Worse, I am just about completely deaf in my right ear. If you haven't tried listening to Eleanor Rigby or Peggy Lee singing You Gotta Have Heart on your headphones when only one of your ears works you have missed one of life's odder experiences. Not that I recommend hearing loss but, it does make a person think from time to time about, hmmm, failing and eventually dying - an ever present memento mori. It also makes a person say, "Eh?" and "What?" and "What did you say?"

This failure to hear annoys other people. Mostly they are too polite to admit annoyance, but not so with spouses. WHusband keeps saying in loud tones, and with false pity, (every time I don't answer some unheard question or respond to an unheard comment) that I am getting more deaf and ought to wear "my trumpet." By "trumpet" he means the $900 low-end hearing aid I bought three years ago and lost two years ago. (I haven't shared that last information with him because it would lead to a lecture on carelessness that I have heard and would just as soon skip).

Fortunately, he is wrong. I am not getting more deaf. By the time I had Otosclerosis diagnosed in '02, it was about as bad as it was going to get. From the NIH website: Otosclerosis is the abnormal growth of bone of the middle ear. This bone prevents structures within the ear from working properly and causes hearing loss. What causes otosclerosis? You ask.

The cause of otosclerosis is not fully understood, although research has shown that otosclerosis tends to run in families and may be hereditary, or passed down from parent to child. People who have a family history of otosclerosis are more likely to develop the disorder. On average, a person who has one parent with otosclerosis has a 25 percent chance of developing the disorder. If both parents have otosclerosis, the risk goes up to 50 percent. Research shows that white, middle-aged women are most at risk.

Well, I guess at 36 I was "middle aged" when my ear started to go on me. Dad and one of his brothers have it. My uncle had surgery and it really worked well for him. The audiologist I consulted a couple of years ago wasn't sure it would help me and Dad is reluctant to try it. I got a hearing aid, uh, for a while.

It was not much help anyway. The audiologist said it might not be. Funny thing about that. I wear glasses too. Glasses, in my experience, just fix what's wrong. Put them on, you can see. The hearing aid was not like that. It helped, but it didn't give me back my ear. And wearing something jammed into your ear is just not for me. I have never been able to wear barettes or headbands; how could I manage a hearing aid for cripes sake? Everytime I got hot it worked loose; I had to fiddle with it like some nursing home gomer with that horrible feedback turning heads. A hearing aid doesn't work with headphones anyway; and its music that I would really love to get in stereo. A year or so I bought some wireless headphones from Sennheiser for the TV and DVD player. These headphones have individual volume controls so I can pump up the volume in my right ear. It still sounds a little like I am listening through cotton batting but stereo is still a treat. Unfortunately, they don't work with an iPod. I actually wrote an email to the Sennheiser last year and recommeded that they manufacture dual control earphones for MP3 players for us half-deaf folk. No response.

I read somewhere that Stephen Colbert is also half deaf. I wonder if otosclerosis is correalated with a good sense of humor? My father is a funny guy.

Periodically I plug my good ear and have my kids yell into the dead one, to see how much I hearing I have left. It isn't good. As noted, depending which way I flip my head phones, I can hear about "Father McKenzie preaching the words of a sermon that no one will hear" or just the bass line. Or, I get Peggy Lee: "Oh it's fine to be a genius of course, but don't put that old horse before the cart" or her back up singers intoning "Corazon, Corazon" but not both.

The silver lining is that it makes it a lot easier to sleep in noisy places (as in near a snorer) and to block out what I don't want to hear. It can be handy to have a dead ear. As I write now, this little advantage is asserting itself. PBS is doing its begathon, showing 60s pop-music-has beens - by the way, have you noticed that PBS always panders to the musical sweet tooth of the (late) middle aged and old when it comes time to raise funds? Three Tenors, Doo wop etc.? Bill Moyers, that pompous druid, and his ilk, are nowhere in sight. I know I could turn the TV down, but the remote is who knows where; someplace on the other end of the room. As I need to focus, I close the good ear and I can write without the distraction of Michelle Phillips nattering on about how great the 60s were (isn't she the mother of Mackenzie Phillips, the actress whose life was pretty much a druggy train wreck thanks to those 60s values?) Oh, but then comes the Fifth Dimension singing Marry Me Bill (aka Wedding Bell Blues). I love that song... Darn I wish I could hear it better.

In other news, I just finished a new biography of Julie Andrews. Julie Andrews An Intimate Biography by Richard Stirling. She is irresistible, isn't she? I saw the book on the "new arrivals" shelf at the Stowe Library and just gave in. Funny about all those lawsuits she's filed down the years; that I hadn't much considered as characteristic of her, but that's why we read biographies. "Intimate" I don't know. That word has been so debased by women's products that I get a little queasy just typing it.

I was reminded of a the book just now by the Fifth Dimension. The woman in Marry Me Bill does all the singing and the guy just stands there smiling and rhytmically bobbing his microphone and doing a little back up ooooing. Stirling reports that when Rex Harrison and Julie were putting together My Fair Lady for Broadway, Harrison early on refused to stay on stage during Julie's final song, "Without You." He informed Moss Hart that he was not "going to stand up there and make a c___ of myself while this young girl sings at me." I had to laugh. One does get the picture... The solution devised by Lerner and Lowe was a revision of the song to allow Harrison to interject his number "You Did It." Stirlng writes, "With the focus diverted from Eliza back to Higgins, Harrison was happy once again." No smiling and ooing and microphone bobbing for Rex Harrison.
Posted by Kim Velk at 8:49 PM 3 comments: