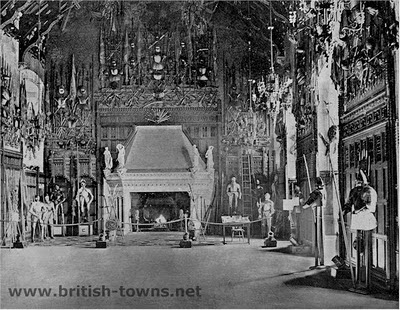 I was watching TV this weekend and tumbled into a building show on PBS featuring a young couple (maybe linked just for TV purposes - it wasn't exactly clear) who were building one of those multi-dormered suburban mansions. You know the types - the ones that were so popular before the real-estate bust: acres of drywall, cultured stone this, electronically controlled that, blah, blah.

As it happens one of my (many) unrealized life goals, is to someday build the house of my imagination. If I ever get that far - you heard it here first - I will not allow the builders to put anything in it that provides a realistic facsimile of a real thing. I want plaster walls. Doors that are solid wood. I want a fireplace - actually, several fireplaces. These fireplaces are to be built of stone, or brick, or some other form of honest masonry. More importantly, on one will be able to turn them on and off with a remote. Logs, smoke, ashes. That's for me.

Not that you asked, but I have been building this house in my mind for years and it just kind of spilled out.

In other news... Still unpacking the old van with the unsold goods of last weekend. I went to an auction preview on Thursday and didn't go the auction on Sunday. This is a first. I think it's progress.

Email ThisBlogThis!Share to TwitterShare to FacebookShare to Pinterest
Labels: Nothing Really. 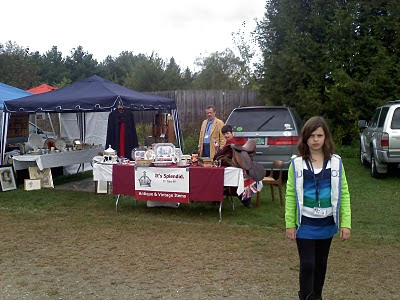 So here's my little mock-Roma family with our tent and our wares at the British Invasion car show last weekend. We spent two days trying to tempt the white people (they were mostly white, but you know what I mean, metaphorically, when I say that) to buy the goods we have spread out upon our blankets. Lots of browsers strolled through our tent but very, very few of them reached into their wallets and bought anything. And darn it, I forgot to teach the kids about how to pick pockets before we got there! As a result, I undertook an effort roughly akin to moving house, twice in a weekend, and made no money.

Still, it was not altogether a bad experience, really. It may have put me off antiques for good, which may be a good thing. Also, Whusband really chipped in, helping to pack and cart and dealing with the kids and this was quite nice. He has tended in the past to be, uhm, "critical" of my collecting and has expressed doubts about my claims that all this stuff was valuable. He had a prime chance to say "I told you so" here, but he didn't. He even agreed that the stuff was nice and encouraged me not to sell it cheap. His chit chat with one of the (rare) paying customers may even lead to the sale of an old Porsche we keep in the barn and drive three times a year. So, not a total loss. Oh - and I sold one of those three saddles, in case you were wondering. The guy who bought it really put the screws to me, trying to get an even deeper discount from the fire sale price posted. (Whusband said I should send him packing but I sold it in the end for $15 more than I paid).

Maybe next year I'll try fortune telling. What do you have to pack for that? A crystal ball? A deck of cards? That I can handle.

It's going to take some time for me to recover from all this. A perfect time to sit with the computer and read other people's blogs.
Posted by Kim Velk at 4:23 PM 4 comments:

Email ThisBlogThis!Share to TwitterShare to FacebookShare to Pinterest
Labels: antiques., or not selling, Selling

The Iron Age Was Rough, But the Stone Age. Don't Get Me Started. ...

Someone, some woman, I work with subscribes to a popular archaeology magazine. I worked this out from a clue she left in the ladies. The clue was a back issue of the magazine.

Thanks to this unidentified but interesting co-worker I spent a few minutes of my day today reading about bog people. You know them. Those human baseball gloves (see below) that turn up periodically in Denmark or Ireland or other northern peat bogs looking disconcertingly like they must have looked when they got pitched in a couple of thousand years ago. The pictures in this article made me think (among other things) about how throwing stuff out, even burying it, doesn't make it go away. Mummys are like an argument for composting.

Here's a tidbit on the bog people from Wikipedia:

Many bog bodies show signs of being stabbed, bludgeoned, hanged or strangled, or a combination of these methods. In some cases the individual had been beheaded, and in the case of the Osterby Head found at Kohlmoor, near to Osterby, Germany in 1948, the head had been deposited in the bog without its body. 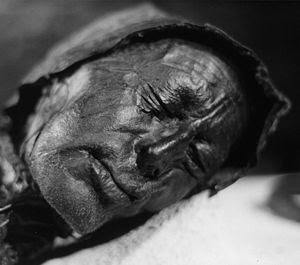 Usually the corpses were naked, sometimes with some items of clothing with them, particularly headgear.In a number of cases, twigs, sticks or stones were placed on top of the body, sometimes in a cross formation, and at other times forked sticks had been driven into the peat to hold the corpse down. According to the archaeologist P.V. Glob, "this probably indicates the wish to pin the dead man firmly into the bog. Some bodies show signs of torture, such as Old Croghan Man, who had deep cuts beneath his nipples.

Wow. And I thought a day at Six Flags was torture!

The bog body article tied in with a thought that I have been turning over for the last few weeks (you'll probably want to stop reading now)about these unimaginably long periods of time in human history before anyone started writing things down.

One of my library-sale books (English history, naturally) says that homo erectus, or at least his immediate ancestor, made his first appearance in what would become Britain during a break in the second ice age, known, apparently, as the Hoxonian period. That would be something like 125,000 years ago. One hundred and twenty five thousand years!

How could they stand it? What, exactly, were our ancestors, who were biologically identical to you and me, I am told, doing for tens of thousands of years at a time? OK. Hunting and gathering -- but for a hundred thousand years? I guess it's hard to be bored if you might be killed by a saber-toothed tiger or a neighboring tribe at any moment, but, come on! Would a little innovation have killed them? Nobody got around to bronze until 2,000 BC and iron took another 1,000 years.

If these stone-age types had been a little more inventive I'd have my jet pack by now. I know it.

The Iron Age, just for a reminder, was that bit of time from about 700 BC til (in Britain) the Romans showed up in 43 AD. When you consider all that nearly blank vast stretch of prehistory, the Romans feel like some relatives with whom we fairly recently stopped exchanging Christmas cards. The Iron Age people, the one that tossed their neighbors into the bogs, or sacrificed them there, or whatever, are like great great grandpa. OK, so great great grandpa couldn't write, but that's how people were in the old country. And, yes, he worshipped bull scrota and took part in human sacrifice, but don't let's get all bourgeois and judgmental. He was us. At least he wore clothes and had village somewhere. (They can tell this by looking at the contents of the bog people).

I saw Quest for Fire when I was in high school, slightly after the Iron Age. I think I'll rent it again. I want and explanation for those 100,000 lost years.

Thanks to any stalwarts still stopping by. I have been preoccupied with Splendid, the booth we'll be setting up at the car show next weekend. (Getting and spending...) I suppose I have also been taking a kind of Quaker meeting approach to the blog lately - sitting here with my mouth shut - waiting for the spirit, or at least for the right combination of bathroom reading and spare time. I am off now to watch American Pickers. See you at the British Invasion in Stowe next weekend.
Posted by Kim Velk at 5:09 PM 6 comments: