7 Random Things Or, My Refrigerator Door, Myself

Lulu Labonne, over at Earwig Sandwich has tagged me to write about 7 Random Things.

Lulu wrote along a kitchen theme, and I am following in her footsteps, diverging just a bit. 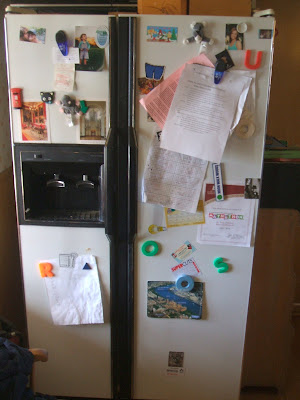 This is a full-frontal of the refrigerator in the kitchen here in the Last House in America. Our fridge is vintage Sears circa 1994. WHusband, then only WBoyfriend, bought this brand new back when we (that is, "he") bought the farm (I'm on the title now - of course - I am a lawyer, you'll recall). If you think the outside looks, hmmm, "unkempt" you should see the inside. Well, no, you wouldn't want to do that. Let's move on to some Random Things. 1. Santa's Village is a twee little amusement park in Jefferson, New Hampshire, about an hour and a half from where I am sitting. It is a complete throwback. Prices for things like hamburgers and soft ice cream are roughly the same as those in the outside world. If you get there after 2 PM, they give you a ticket to come back on another day, any day that season that you choose, for free. (!) When Shackleton and the Understudy were just past toddlerhood, Santa's Village was their idea of heaven.

This magnet was a prize one of them collected about two years ago for getting to each of the 26 alphabet elf stations around the park. The magnet has the holding power of a thrice-used bit of scotch tape, but the elves have a certain daffy something... 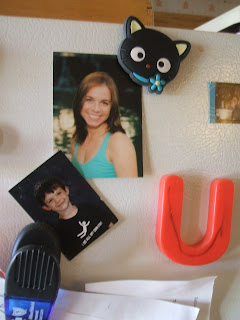 2. Another magnet, another story. Choco Kitty holds the high school graduation photo of Whusband's lovely niece. She is as nice as she looks and she finished high school in Wisconsin this last summer. She sent us an invitation to her graduation and we sent her, well, nothing yet. I am a a bad aunt. I feel bad, so let's hurry on.

Beneath the lovely niece is Shackleton as he appeared in kindergarten. His afterschool caregivers at the YMCA - both young women - asked for copies for of this picture for themselves. He has charisma. His shirt says, "I do my own stunts" which is still true.

The "U" is from a set of alphabet letters I bought before the Understudy (now 10) could even stand up. Oh, those early days of parenthood! Years before she was born, we bought a box of something that was supposed to help us teach our baby math. We never. 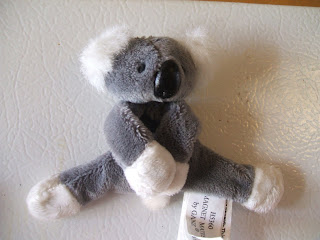 3. This koala is actually the answer to an equation. 1 Kid + 1 Kid + 1 store = 2 items minimum purchase. I was in a nice kids book store a month or two ago with the Understudy and Shackleton. The Understudy got a book. "What about me?" wailed Shackleton. (The alphabet letters, and every other literacy support we have tried for him, have, to date, failed miserably to make a reader out of him).

"How about a magnet?" (I will and do bribe, but as cheaply as possible).
"Actually, you can get two. These are cute."

He got a fuzzy hippo (you might be able to make it out in the full frontal view) and this Koala. Both creatures have magnets in each of their four little feet. They were displayed in the store spread-eagled, like bugs who have gotten the worst part of a windshield. On the ride home from the book store, however, the Understudy discovered they could assume this amusing pose. 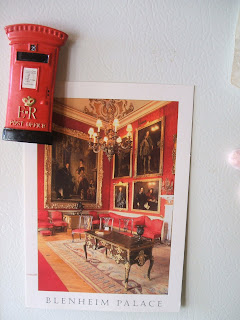 4. The Understudy and I got to go to England this spring. At last! During part of our trip we sponged off some friends in Oxford. The lovely Spongee, Aidan, drove us out to nearby Blenheim Palace for a day of ogling a real palace inhabited by a real old Duke and a lot of animatronic fakes. Loved it. The camera was out of batteries so I bought postcards. The English Post Box magnet came from a tourist trap across Cromwell Road from the Victoria and Albert Museum. We loved the V&A - and this junk shop. It may even be a tie - well, no, the V&A actually had a great place to eat as well as the Great Bed of Ware. It wins. Nevertheless, this card and magnet, I feel, should raise the appraisal on our crappy old house. 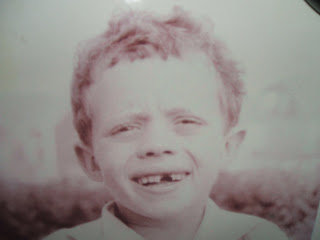 5. This is actually stuck to the side of the fridge. Sorry if that's cheating. It's a reprint, a bad one, of a picture taken of Whusband, aged 7, by his father. Whusband is instantly recognizable in this picture, lo these many years later. His father was gone long before I came on the scene and the only things I have ever heard about him are bad. No wonder the poor kid looks a little worried. His shirt was ironed, though. He had a very nice and careful mother. 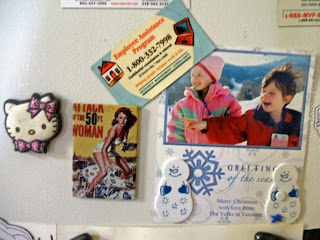 6. Here is a little grouping of things that have survived my various fridge clearing efforts for several years. An old Christmas card, showing the kids near their peak cuteness; the Attack of the 50 Foot Woman Magnet I bought in another life - a single life. (I am tall, just under 50 feet, but fortunately not so tall that perverts in the houses below can look up my tiny, white, tattered skirt).

The magnet featuring the house and laptop on it came in the HR package at my last job - I think. Maybe they sent it to me? It has the number for the Employee Assistance Line, which you can call if you are considering suicide or having any mental or emotional health crisis that might result in a claim against the health insurance. I haven't called it, yet. As far as I know I have only held onto it because you can't have too many fridge magnets.

And, of course, we have Hello Kitty. Back a couple years ago, in a toy store, one kid wanted the Hello Kitty Magnet. Choco Kitty (see #3 above) was bought to placate the other kid. 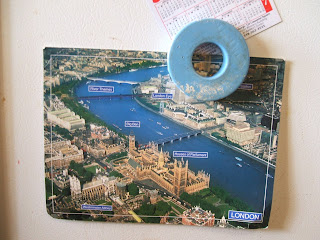 7. Please see Number 4 above. The Understudy and I sent this London postcard across the sea to comfort poor Shackleton while we were gone for a week. He still talks about how much he missed us then. The blue doughnut of a magnet is a TV and computer destroyer and potential finger breaker that Whusband brought into this deal. That postcard is not going anywhere.

OK. That's seven. Thanks Lulu. That was fun. I know not everyone likes to be tagged but I found it sort of like getting assigned to a fun essay topic back in 9th grade. Oh, I can do that! I am going to tag Old Man Neill because I think this kind of thing may be up his street. If anyone else reads this far and wants to take a hand I'd love to see the result.
Posted by Kim Velk at 2:41 PM 2 comments: