It's A Wonderful World, Part 1 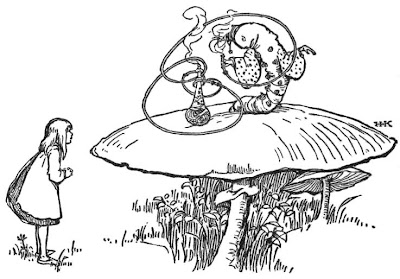 I was flipping through the Peterson Field Guide for Mushrooms today. I wound up, naturally, at the colored plates in the middle. There I learned that these are actual names of mushrooms:

That was on one page.


Shall we pause for a moment to consider who came up with these names? What English peasant in the 12th century nibbled one for his aunt, the town midwife/witch? How these names were recorded and spread? A marvel of nature and the accretion of human knowledge, right here.

Let Me Do You a Favor

I have been meaning to recommend the documentary, Young@Heart, which aired on PBS last week. A documentary? On PBS? She calls that a favor? Maybe for insomniacs.

No, really, it was so much fun - my kids asked to be allowed to stay up and watch it. All of us were glued to it from beginning to end. Here's a snippet from a review on the website:

Time revises every taste and closes every gap. To observe the Young@Heart Chorus, a fluctuating group of about two dozen singers whose average age is 80, perform "Stayin' Alive" by the Bee Gees in Stephen Walker's documentary "Young@Heart" is to be uplifted, if slightly unsettled.

Sung by people approaching the end of their lives, the song is no longer about strutting through the urban jungle with your elbows out; it is a blunt survival anthem. These singers, most of them well- rehearsed amateurs, refuse to go gently into that good night. For them music is oxygen.

When they perform punk classics like "Should I Stay or Should I Go" by the Clash or "I Wanna Be Sedated" by the Ramones, the notion of a generation gap begins to crumble. Apart from the rebellious attitude behind the songs' creation, these are elementary meat-and-potatoes tunes: "Sing Along With Mitch" material but with a hip credential.

The movie concentrates on the rigorous two-month preparations for a 2006 concert at the Academy Theater in Northampton. Guided by the chorus's demanding longtime director, Bob Cilman, the members are learning new material, including "Yes We Can Can," the Allen Toussaint hit for the Pointer Sisters, whose lyrics repeat "can" 71 times in intricate, staccato patterns; Sonic Youth's enigmatic, equally demanding "Schizophrenia"; and the Coldplay ballad "Fix You." [...]

I cried for about half of the film and laughed during the other half. Today, driving to the grocery store and alone in the car, "Fix You" came on the radio. It is sung during the Young@Heart Performance in the film by a charismatic man with an oxygen tank and a death sentence. I started crying again. I am crying now remembering it. There is a scene in the film where the chorus is singing for prisoners at a Massachusetts correctional facility. The cuts between the convicts, many of whom are clearly deeply moved by what they are seeing, and good, old singers (emphasis on "good") was unexpected and brilliant. Maybe it is not the beginning, or even the middle of life where we really get right down to the heart of things...