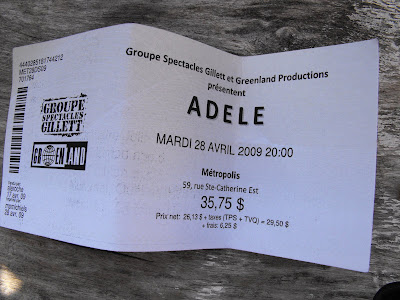 So last night I did a couple duets with Adele at her show in Montreal. She didn't actually know that we were singing a duet. I hope the people near me didn't realize it either - I pretty much made sure that they wouldn't. I didn't want to upstage her, or bother anyone or anything so I sang pretty quietly. Still, it gave me a little thrill to hear (in my one good ear) my voice and Adele's live and in-person at the same time. I've decided though that she's going to have to make it as soloist though. I can't have her being the Garfunkel to my Simon. 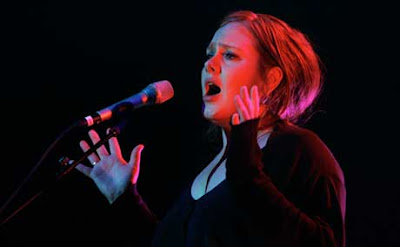 The reviewer from the Montreal Gazette did a good job. If you care to, you can read his review here.

I am happy to report that my friend Splenda came along and was lovely as she could be. She took me to dinner at a great little French place on St. Denis before the show and chaufered me to and from the Woolfoot family Montreal Apartment. (That skyline view is the view from the MTL Abode).

Both Splenda and I were charmed by Adele who, it seems, can make her voice do anything and who was so down-to-earth and winning when she wasn't singing. I confess to being a bit worried about her (Adele, not Splenda). I mean, she's only 20! What did you know about money when you were 20? Probably you didn't have any, so no big, but our Adele. If you read this, my dear, find out who handles David Bowie's money and go see him/her/them. I think he has managed to hang onto quite a pile and despite the ups and downs has never flamed (no pun intended) out. 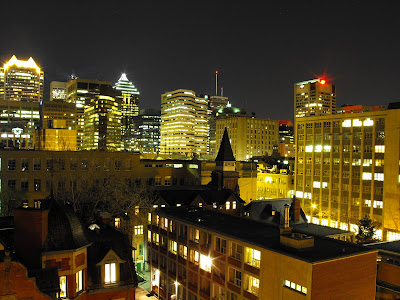 Needless to say, it was great to be back in Montreal all on my own to meet up with Splenda and go out to a concert. Ooooh. Now I remember why having kids was such an adjustment!

Listening to Adele last night I recalled my own 20th birthday, which occurred in Montreal. I remember thinking, and saying, that I had to be serious because I was 20. What a maroon! I also was thinking last night about how if at 20, I wrote a song (something of which I would be incapable of doing since I know nothing about music) or even a poem about breaking up with my boyfriend it would have been (and still would be) absolute shite. Adele's biggest song, "Chasing Pavements" and all her best songs are love songs - and they are great. Hmm. Talent.
Posted by Kim Velk at 4:50 PM 5 comments: