A Summer Sabbath Observance, Such as it Is 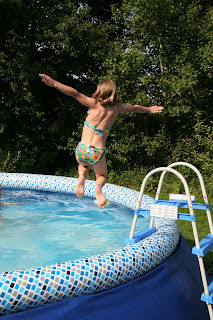 The weekend comes to a close having been spent mainly socializing. Our English friends are back at their house down the road for a few weeks and our kids and theirs went swimming together yesterday and then we all had dinner. Today, other friends who came to visit after a long time away. They are very old and dear friends and it was great to see them again, but the visit was not just all fun and games. Since we saw them last they have had some terrifying health news about one of their children and suffered some other family tragedies. I'll say no more about that (since it's all their business and no one else's) except that the pain of it has me thinking religious thoughts (these terrible blows, and nature films, always stir my piety, albeit in different ways). I remember once hearing Pope John Paul urge people to get close to the ill and not be afraid...

So, before this Sunday is completely kaput, with no religious observance on my part, here is the promised (slightly excerpted) repost on my spiritual home, the Church of St. Andrew and St. Paul in Montreal I wrote this two years ago when our family were all up in Montreal for a winter weekend. The minister who had been in charge while I was in college was filling in that Sunday (he had retired). I brought the kids and and made it to the service that inspired this post. 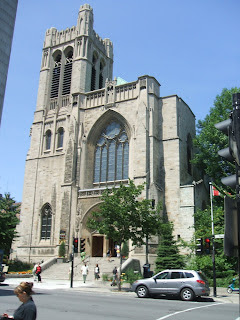 The Church of St. Andrew and St. Paul is a Presbyterian Church and was built by a prosperous set of Scotch/English/Canadian high society back just before the second World War got going. It was an amalgamation of the Church of St. Andrew and the Church of St. Paul. This group (the founders of the “A&P,” as it is sometimes known) and their ilk have gone and we will not see their like again. In their current incarnation (today’s rich people), charitable efforts are not directed at church buildings and stained glass. The A&P, is a gothic revival stone church with an impressive stone tower that anchors the corner of Rue Redpath and Sherbrooke Street in what is still, in some senses, Montreal’s “best” neighborhood.

The sanctuary is large and long and the ceiling is vaulted. The pews, the altar, the pulpit, the model church over the pulpit, all are made well and out of the best things. It is a cathedral of and monument to a particular brand of colonial Britannic Protestantism. In the giant stained glass window over the altar Jesus rises triumphant and white with his arms outstretched and the awed onlookers include a be-kilted soldier holding a Union Jack. The weekly bulletins explain that the faded flags that hang in rows on slightly bowed poles above the heads of the congregation are the colors of the Black Watch, and that the church is the regimental church of the Black Watch. [N.B.: When I got back to church at A&P this summer, the banners were still there but the explanation about the Black Watch was gone. I wondered what that was all about...]

I have never been particularly active in any church organizations but I grew up going with some regularity to the Methodist Church in my home town of Schenectady, New York. We may have made it to church about once a month. We were the family that was late every spring when they changed the clocks.

I bonded with those services and my fellow middle-Americans. In the ‘70s at our Methodist Church, everyone was nice and the emphasis was on reflection rather than fervency. The service went basically like this: Call to worship, hymn (choir entering), reading, children’s sermon, prayer (exit children), hymn, collection, sermon, hymn (choir exiting), blessing, cofffee, doughnuts. Once a month, on the first Sunday, we did communion, usually in our seats but sometimes at the rail. The hymns were the same ones my great grandmother sang.

Since then, this has seemed to me the right way for a church to be. As an undergraduate in Montreal in the mid-80s I was in search of a church in the poor man’s Paris that a Methodist girl from Schenectady could attend without making a fool of herself. McGill University, which is largely the product of that same group of people that endowed the city with St. Andrew and St. Paul, is in the same neighborhood as the Church. I decided to chance it. It was Presbyterian, but I figured that was close enough. Furthermore, I recalled that my maternal grandfather, Floyd Stark, had been raised as a Presbyterian by his mother, Ella Macumber, (though he had gone Methodist under Grandma’s influence) so I figured could claim some reasonable heritage connection.

It is one of the hazards of Protestantism that those born into any of its branches are likely at some point to go in search of church that speaks to them instead of simply submitting to the authority of their natal church. I respect the Catholic and Orthodox traditions, but 500 years of Protestant ancestry has disabled me from an honest embrace of them. I can’t help weighing up the belief systems on offer. At the Church of St. Andrew and St. Paul, I found my church.

The service followed the same outline as the Methodist one to which I had become accustomed. The hymns were the same, although the Presbyterians went in for something called metrical psalms. I loved the way they did things, though I couldn’t help a little bit of inner chuckling at the Presbers (church leaders) who periodically appeared, marching solemnly through the church and sat in the row of high backed carved gothic chairs at the back of the altar. They were not all older white men, there were plenty of women and people obviously not of Scottish heritage. They were all, however, so extremely dignified… The Church of St. Andrew and St. Paul still looks back to Old Scotland. I think the Queen Mother dedicated the Organ or something back in the 80s (I wasn’t at that service). I did hear a reading at the A&P one day by a very florid visiting gentleman named, believe it or not, Lord Elphinstone.

This is not to say that the church is snobby. There were quite a few students in the congregation with backpacks and casual clothes and I always felt quite at home there. I enjoyed these little cultural flourishes. They were so obviously not put-ons, but a genuine expression of the heritage of this Church. And the congregation was full of people of many stripes (the superintendent of the apartment building where I lived during law school, Mr. Ong, was a member of the A&P choir back in those days). People were exactly the right amount of friendly: they always smiled and nodded and said hello. The minister invited people to church events from the pulpit. No one tackled you to get your home phone number. Perfect. There were no guitars. No stopping the service midway to run around the church shaking hands and hugging.

The church has always had, and retains, a commitment to great church music. There is a professional music director and a choir that sings Christmas carols for the CBC each year. The massive organ can boom through the church to vibrate the stone pillars. Just as important, and what was such a treat, nay, blessing, for me on my recent revisit, is a minister with genuine literary talent. Back in the ‘80s and ‘90s when I went regularly to church at the A&P the leader was the Rev. James Armour. This last weekend when I was back in Montreal, the Rev. Armour, now retired, was filling in for whomever the new guy is. When I saw the Rev. Armour’s name on the sign in front of the church, I knew I couldn’t miss the service.

Q: Where have all the Rev. Armours gone? I studied English lit. as an under graduate and was marked forever by John Donne and John Milton and a handful of other religious geniuses who were also literary geniuses. The sermon is an art form, or can be. The Rev. Armour was clearly an offshoot of the root that is found way back in that tradition. I wouldn’t embarrass him by classing him with Donne and Milton but he could think, write, and deliver a sermon of beauty and logic week after week. More than just afflicting the comfortable and comforting the afflicted (the role expected of ministers, as he joked once) he mined the Bible for insight and gave sermons that demanded reflection. He did the same when I lucked back into church last week. I was so grateful to have a chance to hear him again this last weekend, I was almost overcome - which is not really the done thing there. Thank God – really, for all of it, and to all those Saints who from their labors rest who made the A&P what it is.
http://www.standrewstpaul.com/
Posted by Kim Velk at 10:02 PM 1 comment: