This Morning at the Last House; The Golden Compass 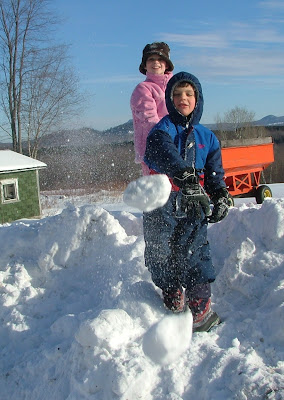 Snow is in the forecast today and lots of it. At 6:22 AM, as I write, it is still dark, but peering up at the streetlight(one benefit of being the last house in the village is that we are also at the end of the last street and have a village-supplied light 50 feet from the front door); looking at the streetlight I see only a fine, confectioner's sugar snow falling lightly. The Weather Channel and the local forecasters have practically announced the Apocalypse: SNOW! WIND! and then MORE SNOW !and MORE WIND! Hmm. We'll see. I think the fizzle rate on these forecasts is about 50 percent. Nevertheless, the Doomsayers have the Kids and I more or less counting on a snow day for tomorrow. Also, I have been preparing Kid 2 for days for the fact that we may not be able to get to the party to build gingerbread houses at the home of his little best friend in Hyde Park (30 miles distant at least) that is scheduled for this PM. I am going to need blizzard conditions to persuade him that attendance is a bad idea.
Woolfoot Consumer News and Reviews Continued
I don't think I wrote here about my experience a few months back with Philip Pullman's "His Dark Materials; The Golden Compass etc. After I got my new lap

top this summer, from which I am now addressing you, I signed up for audible.com and started looking for good children's literature. I was directed repeatedly to Pullman's series so I took a chance and downloaded the audio version of TGC. Well, if you've been reading here, you know my enthusiasms can be a little extreme from time to time. I was ready to worship at the altar of Philip Pullman. I still am, metaphorically, anyway. The audio version of that book was absolutely the single best production of an audio book I have ever heard. The book is brilliant; Pullman reads it himself and there is a cast of wonderful actors playing the parts. I could not stop listening. I jumped on audible and wrote a review praising the book to the sky. I would do it again. Hooked as I was, I had to hear the rest of the trilogy. I liked and admired The Subtle Knife and The Amber Spyglass but I didn't think they were really nearly as good as The Golden Compass.
Having established us in this wonderful world in his first book, the center could not hold. The world of TGC had some rules; those all seemed to disappear by the time we got to the end. Those rules are important. I am a great admirer of Hayao Miyazaki. There's a scene in Spirited Away (my favorite movie of all time) where the boy hero must smuggle his new friend, the heroine, into the magical bathhouse where he works and where she must go. He tells her that she has to hold her breath as they cross the bridge into this bathhouse. If she takes a breath, the crowd of magical creatures on the bridge will be able to see her and there will be big trouble.
Miyazai talked about that scene in an interview I heard. He said how it was important for children to have such rules in their stories. He had made this particular one up himself - it wasn't based on any folk tale or anything (although we feel that it could have been, because we all know these rules and expect them in our fairy tales). Of course, in the film, the girl is startled into a deep intake of breath (a talking frog in a little bathrobe jumps into the face of her friend to ask where he has been and she gasps). The girl is revealed and only quick thinking and action by her friend (who puts a hex on the frog) saves them.
Well, Pullman seems to give up on any parameters by the time he gets to The Amber Spyglass. Anything can happen; Angels make themselves manifest and talk with people; they have some powers and not others but we don't know where those begin and end; the subtle knife cuts doors between worlds and this can mean almost anything at any time. The big Cataclysmic Showdown at the end of the third book seems to me a chaotic muddle. As for the religious debates that are raging about all this now, Pullman is an artist and entitled to his opinions. I think the trilogy is clearly unfriendly to organized religion. I am not sympathetic to that point of view, but I Pullman is an artist and I respect his vision. Also my religious philosophy is summed up by John Milton (who is quoted by Pullman and is the author of the phrase "His Dark Materials"). "God needs not man's work or his own gifts. His state is Kingly." In short, God has nothing to fear from Philip Pullman.
. The opposite is not true - but Pullman has a gift. Using that gift, according to his lights, can't be a wrong thing - and consider the wonderful thing he has made.
In related news, I learned in my early morning web surfing, only moments ago, that Kate Bush has contributed a song to the soundtrack of the new Golden Compass Movie. (If I weren't worried about morphing into a female variant of Comic Book Guy, and about the Wiccan-lonely-hearts types who seem to comprise her organized admirers, I'd probably start a fan club for Kate Bush too). Within 10 minutes I had downloaded the whole soundtrack from iTunes. In a slimy corporate move, iTunes wouldn't let you buy the the Kate Bush single unless you buy the whole album. The whole raison d'etre of iTunes is to prevent having to buy whole albums to get one song. Still, I listened a little to the other tracks and could tell I would like it so, I shelled out the coin. I am listening even now. Next time I get back I'll let you know what I think.
Kid 1 has come down and has been waiting patiently for her Cheerios, and to use the computer. And here's kid 2 (he had a dream that he would be a really good knitter...) Bye for now.
Posted by Kim Velk at 6:03 AM No comments: