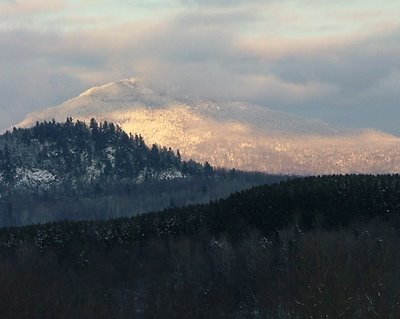 The Woolfoot Family has spent New Year's Eve (so far at least) here at the Last House. Just around 3:30 as the sun was headed down on 2006 I snapped this picture (with a telephoto lens, then edited it a bit to tighten the shot) of Owl's Head mountain over in Canada.

The kids had a great time sledding down one of the hills here at the farm today. If I could post a video I would. I got a funny one of Kid 2 tumling off at the bottom while Kid 1 laughed and screamed and yelled "Wicked." I even made a few runs down with Kid 1. It was fun.

Spent early morning yesterday at Jay. I was going to take a walk on the golf course (as per my usual) but found it had become impassable - or at least not pleasantly passable - without snow shoes. I had all my ski gear with me, so I took one run down the mountain. It wasn't as great up there as I had thought it would be, based on the snow down lower. Dinner last night with our Canadian Friends, Vitali and Brenda, whose kids are bookends with ours (same ages as ours, sexes flipped).