Kid 1 and Kid 2 and Vermont 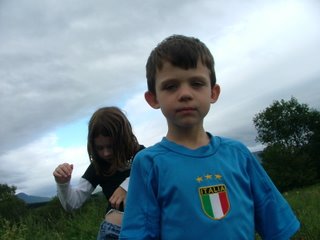 This may be my Christmas card this year. Edgy, huh?
Posted by Kim Velk at 6:51 AM No comments:

St. Kathleen of the D-List

My face has mostly recovered from the strain of laughing and non-stop smiling I endured the night before last when I saw Kathy Griffin at the Palace Theater in Albany, NY. Now friends, despite the rave review she properly got from the Albany Times Union, I alone am returned to tell you why we really all love Kathy, beyond the too obvious reason that she is funny.

She is doing the Lord's work - an apostle with an audience - sold out, adoring. As Jesus came to say unto us that, truly, those who sat at the lunchtable of the popular kids have had had their reward Kathy is returned to remind us of that truth. Nevermind that she, a professed long ago and deeply lapsed Catholic called priests "Kidf___ers" a few times, well, maybe a dozen times or so in the hour and a half, or that the funniest bit in the whole show was her rendition of her devout 85-year-old mother's disregard of the commandment not to take the Lord's name in vain (when asked by Kathy to go on a lesbian cruise for a Bravo TV special) her moral authority is intact.

A-list celebrities are ridiculous and the ordinary sloggers, and the despised and outcast (gays of both sexes ascendant and a big part of her fan club) are, uplifted in Kathy's company. She's come to tell us nobodies in a conspiratorial tone, how ridiculous those fabulous people are. She's one of us - or convincingly pretends to be - whose been in their world spying and is here to tell us, and, you guys, you won't believe it!

Come to think of it, Moses hung out with Pharoah and his ilk for a long time and was a Jewish guy. Maybe, instead of thundering down the mountain and smashing stone tablets, dishing up Pharoah and his hangers on would have helped keep the Israelites in line. Maybe Aaron, history's first Jewish lawyer and a smooth talker, could have had that job...Of course, he wasn't adopted into Pharoah's family the way that Moses was. To make it work you need a first-hand account from someone who has really seen how it all works.

OK, that Old Testament analogy probably isn't really that apt. That dour northerner in me just won't shut up. (Do we always have to loop back to Jesus - even in a review of a nearly x-rated comedienne? hmmm). I have to admit as well that we love to laugh at Paris Hilton and her crabs and don't really want her to stop doing what she is doing. It's fun and its funny and part of what makes America great; you can see that when Kathy is talking about it. Go see her if you can.