The World in a Teacup 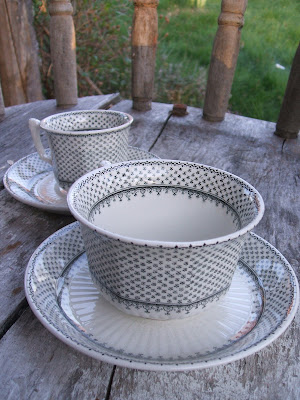 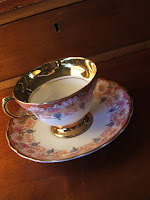 My favorite blogger is Juliet Doyle. See her blog, "Musings From A Muddy Island," (link to your right). I think we both found inspiration in my last teacup posting and her comments on them i.e.("The Single Most Beautiful Teacup in The World"). So, in what is either an inspired bit of blogging or a disgustingly cloying display of 40-something tweeness, I am back with a few of my favorites from the China cupboard. I just checked on "Musings" and Juliet has not yet got her teacup photos and commentary going. I have faith however, that between us we can reveal the true and worthy fascination (and fun) of the teacup. Are you still in on this Juliet? 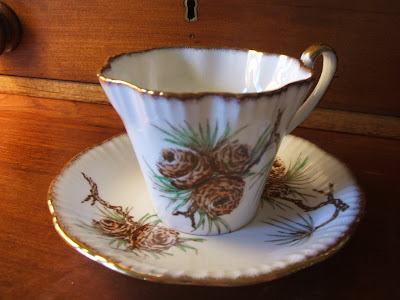 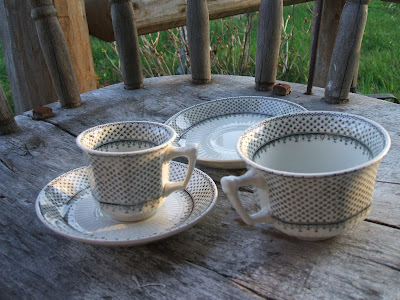 Leading off my teacup show are a few of my favorites. I am particularly fond of the one with the pine cones on it. It's got an American feel(though made in England). The one with the gold rim is just so elegant - I felt underdressed and clumsy just holding it. The black and white pieces photographed on the old chair are from a box lot of 27 that I picked up at auction a couple of weeks ago. The pattern is "Minuet" by WM Adams & Son England and my guess is they are from the teens or '20s. They are a little unusual because they are black transferware, not the more usual blue. I love the pattern and the style and also that these are meant for everyday as "genuine English ironstone" (a.k.a., "clay") not fine china. The demitasse cup is particularly fetching. 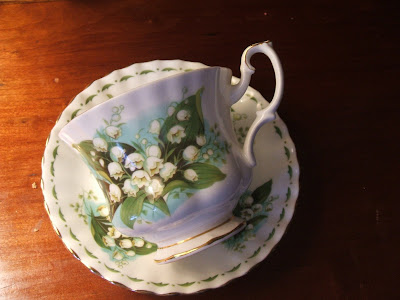 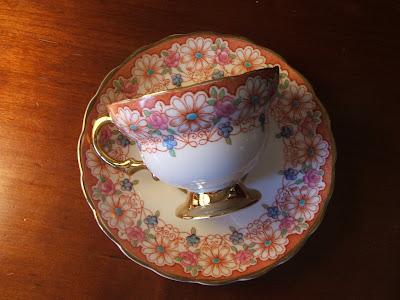 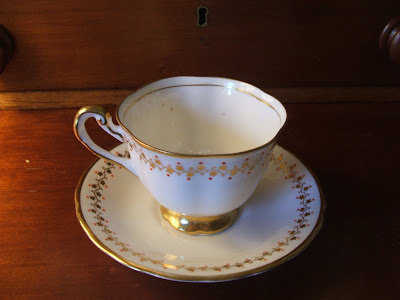 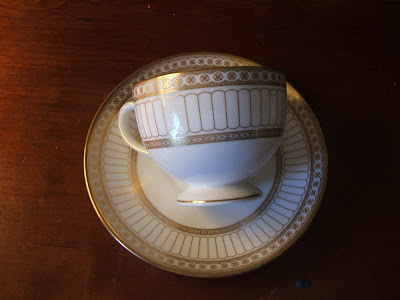 These next few are not properly mine; my mother and her husband asked us to store them some years back. It appears likely that I will be their next custodian, however. (Teacups outlive their owners, which is one of the great and sort of scary things about them). The "May" teacup is a little too sweet, but unashamedly so and I think it pulls it off. The others are just plain refined; real emblems of the pinnacle of western civilization that tea drinking represents (at least some of the time - like those times you bother to go to the China cabinet and get out the good teacups).

I know entire books have been devoted to exploring the great and overlooked contributions to the world of the simplest things; an engineer called Henry Petroski published a book in the early 90s about the pencil: The Pencil: A History of Design and Circumstance. Has the teacup book been written? I searched Amazon.com and didn't find it - maybe Juliet and I could take it on? Or maybe a blog post or two, or five, is enough. 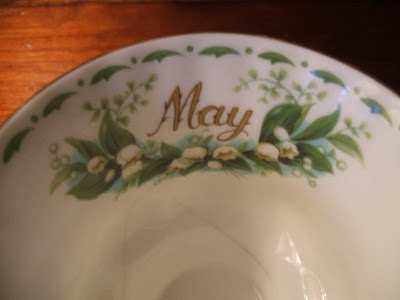 Email ThisBlogThis!Share to TwitterShare to FacebookShare to Pinterest
Labels: Teacup appreciation; May; Henry Petroski, The History of Western Civilization

The Single Most Beautiful Teacup (and saucer) In The World 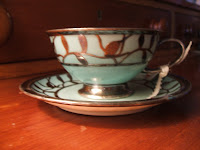 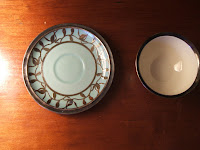 Reading through this blog, I doubt one would get the idea that what I do for my real work (for which I get paid and have health insurance etc.) is to handle court matters involving the state custody of mentally retarded would-be felons, or that I used to prosecute crimes of domestic violence and sex assault. With a jobs like those, you wouldn't expect that what I find really exciting is spotting a bit of Royal Doulton or Mintons in a box lot at auction, or some old college pennants, or a drawing or painting or etching that looks like it came from the 1920s or '30s, or a tea cup on the shelf of a local antique store. But it's true. Garrison Keillor once wrote in a story that if you really want to get people talking, don't ask them about their jobs, ask them about their hobbies. I am glad to have my present job; we all need a paycheck and health insurance and at least it's not Dilbert work, but what really gets me going these days is treasure hunting.

A teacup!? you say. This blog is descending into old fashioned ladies-pages treacle. But isn't it true that a teacup, so often interpreted and by so many artisans (and artists), that it can be venerated as a work of art? This little survivor was sitting on the shelf yesterday at my favorite antique store in Waterbury, VT. The shop, called M. Lewis, is in an old corner block building in the center of downtown. Yesterday M(artha) Lewis was minding the store herself. She's in her upper 70s, I think, but age has not dimmed her charms. I love her stuff so much (an honorary 70-something myself?) I was keeping her store my little secret in the Blogospere til now. M. Lewis told me as I paid ($16) that she's just back from a 10-day trip to Scotland. Naturally we had a brief natter about the UK and the Isle of Sky (a place she says I should definitely go and visit. I agreed of course).

As for this cup, it was made by Rosenthal in occupied Germany, as the mark shows. I think it is decorated with real silver. I normally gravitate to English pottery but this, among a shelf of teacups, was irresistible. Art. Yes, why not. I read once that architects become famous for their ability to design a chair. In a chair you can find a design for a whole city. So, why not in a teacup?

Off to work. I have two status conferences this morning in cases I am working on but my big excitement for the day will be to get back to M. Lewis for a plate I saw yesterday... Stay tuned.
Posted by Kim Velk at 6:01 AM 11 comments: