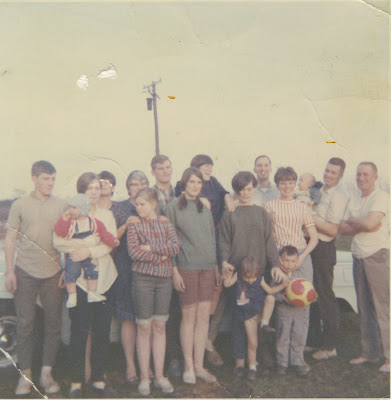 This post comes to you from my Dad's home office near my natal city of Albany, New York. Later today, he and I and the Understudy and Shackleton will head west on the New York State Thruway to "the Farm" (there is only one in our family); the Farm where my father and his 11 brothers and sisters grew up.

My aunt took over the house after my grandfather's death about 10 years ago and two more of my uncles still live in adjacent properties. One of them is still a dairy farmer. The other, with his wife, built an off-the-grid cabin in the woods on a corner of the Farm property. (During the 70s this same couple also converted a school bus into a house and went back and forth to Oregon a few times, so you get the picture).

Dad is the eldest of the 12. This picture above is all of them, with my grandparents. The grandparents were both born and raised in Indiana and were responsible for the completely mid-western tone of the place. This snapshot, in a format which has been repeated many times at weddings and anniversaries and family reunions down the years, was taken around 1970. A few of us older grandchildren are there in the front. I'm the little kid in the terribly short dress or long shirt or something, stamping my foot. My cousin Phil is next to me. My hand is being held by my beautiful Aunt Susie, the only one of the 12 not still present in this earthly abode (breast cancer at 50).

I could go on and on, as is sometimes my way, about this place and these people. Just a few details this morning for your sake and mine and for Shackleton's - who just came downstairs and wants to play Club Penguin:

When I was little, all the aunts and uncles were coming and going from the Farm all the time, and the youngest two girls were teenagers. There was something happening with somebody every minute of the day. There were always new kittens somewhere (generally hidden from us if possible); there was a big chest-freezer off the kitchen that always had many half gallons of ice cream in it; there was a big TV in the living room where a person could watch Monster Movie Matinee; there was a tractor that my grandfather let the grandchildren drive; there was a pony or three in the barn. There was a pond. There was perfect darkness in the front yard on summer nights, ideal for hide and seek, and a hay mow which was also fabulous for that purpose, that is if you dared to play hide and seek in the dark places of the Farm.

The aunts and uncles all had ghost stories to tell about the place, mostly centering on the bedrooms upstairs. The house was on the route of the Underground Railroad and a black man in chains was sometimes seen along with a small black boy. The boy was suspected of contending with one of my uncles one night to steal the covers off his bed. UFOs had been seen in the field across from the house. For this reason, when I stayed overnight there, I learned from my youngest aunt (nine years older than me) to put a magic shield over my bed. This is done by laying flat on your bed, waving your arm overhead and saying "magic shield protect me." It worked too.

My own kids have been to the Farm only a handful of times. It's a long way from northern Vermont. But they are looking forward to returning today for a visit. My aunt in residence there is one of my favorites. She has a way of laughing where she doesn't make any noise but her shoulders move up and down quickly. She calls a grocery bag a "sack" and the word "always" comes out "oise". (midwestern usages, I think). Her greatness is further revealed by the fact that she informed me (without my asking) that I didn't need to bring any kid provisions for our stay because she has 18 boxes of Kraft Mac and Cheese (bought at Costco some time ago - it's my kids' favorite food and appropriately junky in keeping with the family tradition). She also recently bought a Wii that is set up in the kitchen. She does the bowling game there in the evenings with her off-the-grid brother and sister in law who are not, thankfully, so far off the grid they can't come down to the Farm house and play Wii games. We can hardly wait to go play, too.
Posted by Kim Velk at 6:43 AM 6 comments: