Barn and the View into Canada from the Last House (Yesterday) 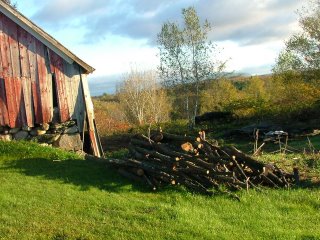 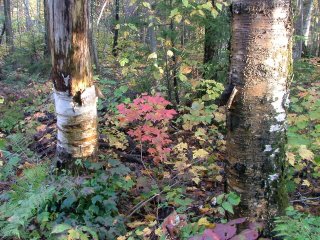 Saturday in the woods 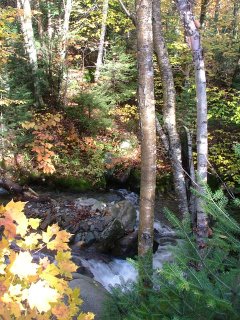 It's ridiculously early on Sunday morning and my Protestant brain is listing again toward thoughts religious, though church-going is not on my North Troy agenda this morning (for further discussion on that point see previous post, "Softly and Tenderly").

Instead I have been pondering a little revelation provided by reading John Lahr's profile of Helen Mirren in a recent issue of the New Yorker. Helen Mirren may be the actress I most admire. She has been so brilliant in Prime Suspect, it's unspeakable. Until two hours ago, when I finished my insomniac reading of this profile, I never knew anything about her background. Turns out she's the daughter of a Russian emigre (I don't know how to manage a accent mark on this blog keyboard), a defeated sort of character as per the interview, and a virago-sounding atheist English mother. Well, that is interesting. Maybe I should blame it on Lahr, but, despite these promising beginnings in this profile Dame Helen comes off as being sort of insubstantial. Lahr writes about her as a "QUEEN" but talks about a trip he makes with her and her husband - Taylor Somebody - to a California race track where she makes cheap bets. Perhaps I am being unduly influenced by the fact that she has lived in California, primarily, for more than 20 years and has no children. Both leading characteristics of a light weight. Also, the only movie in the long list on her CV that I knew and admired was the Madness of King George. I remember when I saw it, years ago, that her performance had been praised, and Lahr praises it again, but as I recall, her part was just barely more than eensy weensy. She was wasted there. Still, she has got to be brilliant. You can see it on TV.

So, get to the revelation you say. My other weekend reading has been, incidentally, a few poems by Emily Dickinson. At 41 I am now ready for her. I admired the assigned readings I did back at McGill 20 years ago, but I don't think I "got" them like I can get them now. I was lying down to dry off after a bath yesterday and picked up a Modern Library Anthology of Engilsh and American Poetry that I scavenged from the book sale at the Fletcher Free Library in Burlington two weeks ago. I read this:

Safe in their alabaster chambers,
Untouched by morning and untouched by noon
Sleep the meek members of the resurrection
Rafter of satin, and roof of stone.

Light laughs the breeze in her castle of sunshine
Babbles the bee in a stolid ear;
Pipe the sweet birds in ignorant cadence-
Ah, what sagacity perished here!

Grand go the years in the crescent above them;
Worlds scoop their arcs and firmaments row,
Diadems drop and Doges surrender,
Soundless as dots on a disk of snow.

OK, ladies and gentleman, let us observe a moment of silence for that!


So, reading Helen Mirren's profile, thinking of her and California, as it exists iconically to all of us non-Californians around the world, and the cult of celebrity of which the New Yorker performs its part, at the upper end where it is nearly priestly, and of Emily Dickinson and the previous 2000 years or so of Western Civilization, what happened to our ancestors' focus on death? Emily was notably profound on the subject. Good riddance, you say? Well, Yes. I guess. But does it make us silly - even the artists? Memento Mori - remember you must die - was drilled into everybody's heads in Christendom for thousands of years. It made a big impact on Emily. What about Helen? I don't have the answer, just asking the question.

I have thought for a while that many things that we seem to think we have done with in this day and time are really only waiting for a revival in a new "incarnation." All the nuns are old ladies now and no one in the first world is signing up for their thing. But the baby is still there in the bathwater and I think it is due to be born again, even here, where everyone is bowing toward California ...
Posted by Kim Velk at 6:58 AM No comments: