Children's Books that Were - The Joy Street Annuals


There is a single shelf in my bedroom where I keep my favorite children's books -that is, the favorites that are also "collectibles;" those that I love as much for their quality as objects as for their content.

Gladys Peto, about whom I and others have blogged much in the last little while, was the writer and artist who got me interested in the children's books of the 1920s and '30s, especially English ones. Those books are too old now, and too fragile for general use by the kids (who aren't particularly interested in this vintage of book anyway). I have decided that now that Mme. Peto is getting her due in the Blogosphere (see in particular Jeanette Payne's website, link to your right) I should do my bit by swinging my Blogger spotlight over another nearly forgotten and obscure but very worthy bit of children's literature; the Joy Street annuals.

These are contemporary with Peto's heyday (the 20s and 30s). I have the first four, I think there are about 15. Since the "collectibles" shelf is full (and my wallet is empty) I am not trying to complete the set. It is enough for me to take down one or two from my little collection from time to time and admire them. I occasionally find a story that suits my 21st century kids. The writing is great, really clever and interesting, but most of it is not very accessible to kids today (I am impressed at what was expected of kids in the 20s and 30s!). Each time I get back into these volumes, as I did today, I am amazed at their quality. I think the editors must have taken a lot of pleasure in putting together these books; they feel as though they have been "crafted" rather than merely published. I also imagine that the editors would have had a lot of fun in working with the artists and writers who contributed; it was quite a group of luminaries - although I have not found that Mme Peto was among them. It may be well and truly said that they don't make 'em like this anymore.

I learned about the Joy Street Annuals from the Cambridge Guide to Children's Books in English by Victor Watson, which I bought some years ago thinking it would help with Peto research. There was no Gladys Peto article (maybe in the second edition...?) I did learn the following, however:

Joy Street British miscellany for children published by Basil Blackwell (Oxford) [and by Appleton of New York in the U.S.] in the 20s and 30s, unusual for it editors' commitment to high standards for design printing and bookbinding, and for its policy of publishing stories and poems by the best-known children's authors. Number One Joy Street (1923) contained original work by Walter de la Mare, Eleanor Farjeon, Hilaire Belloc, Laurence Housman, Edith Sitwell and Rose Fyleman. Contributors to subsequent volumes included G.K. Chesterton, A.A. Milne and Compton Mackenzie. There were few adventure stories, few school stories and no non-fiction articles; the emphasis was on fantasy, magic, humor and poetry. What helped make Joy Street distinctive was the unusually high standard of artwork; in the early issues the colour plates were tipped in on special paper and the black and white drawings were of a very high quality, providing your readers of the day with an alternative to the poorly designed but less expensive annuals such as Chatterbox. Although the 13th issue was superstitiously entitled 12a Joy Street, publication unluckily came to an end in the early 1940s [Article by Victor Watson].

The Joy Street books are not hard to find (I recommend the AddAll Used Book search engine - link to your right - if you have any interest in picking up a few of your own). They are also not terribly expensive; they usually go for just a few dollars on ebay when they turn up. Frankly, I don't believe the demand is what it should be, but that makes it nice for those who do want to do a little collecting. I managed to get a few scans done this afternoon and so, I am sharing. All of the above come from Numbers 1 and 4 Joy Street. I could have spent hours at the scanner and still not have copied out half of the things that are worthy of another look and some admiration in just these two volumes.

Each book is cloth bound (some, at least, originally had dust jackets but I haven't seen one complete). They are chunky and the paper is heavy. The tipped-in illustrations are full color. Some of those are a little ho hum but others are very frameworthy (not that I would cut one up for the pictures unless the book was a complete loss). The black and white drawings are often brilliant.

So, here for your viewing pleasure are a few of the treasures of a couple of the volumes of Joy Street from the 1920s. (My copies are the English versions; I believe the American printings were just about identical, however).


Note the proto tele-tubby that appears to the far right here. 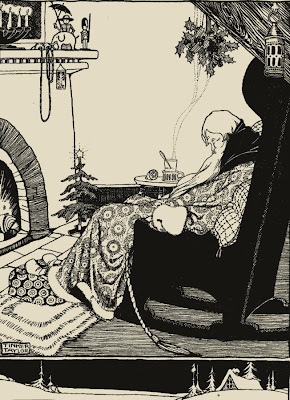 "The Rules of the Game" at the Last House 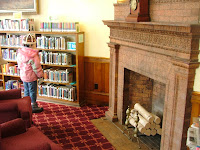 Two weeks ago, I borrowed the DVD of the famous Jean Renoir film, "La Regle du Jeu." I got it from the beautiful Goodrich Memorial Library in Newport, Vermont (the pinnacle of high culture here in the back of beyond). The photo above was taken in one of the library's rooms and the link is below. I think I saw the film (we must not call it a "movie") as a 20-something student. I managed to watch most of it again this morning (on my son's twin bed on the excuse I was cleaning his room). I had to try to see it today because it was a week overdue and in my experience libraries typically charge a dollar a day for overdue DVDs. It had to get the thing back to the Goodrich but also get my money's worth out of it!

I am happy to report my total fine was 60 cents. I felt bad enough about it that I bought a couple of pictures of the library (a fundraiser) and, last of the Big Spenders, I also let them keep the change from my dollar. In any case, the film is a critic's darling and, even with my kids bursting in and demanding to be tickled or otherwise attended to, it is obvious why. I am a better age now to appreciate the farce and the genius of the photography than I was at 21. Here's a link to the cool trailer for the good Criterion Collection DVD, which is the version I was able to borrow for so long:


Puppy Update
In other news, our Maisy has settled in so well it's spooky. (Look back a couple of posts for a picture). She's as sweet as she looks. Only one pee in the house so far! And no crying at night either. I am touching wood... 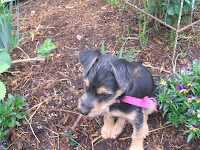