Walking on the Mountain - '70s Kids Books - A Budding Affection

Last Sunday I tried out my first hike on Jay Peak with wee Maisy. She did great. In fact, I credit her with walking about twice as far as I did because of her little detours around my feet. Here's some of what we saw. 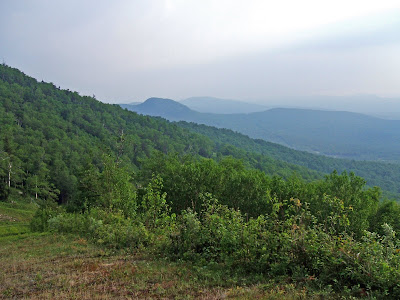 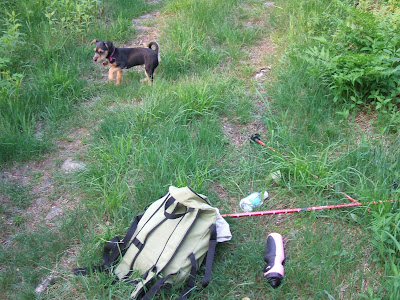 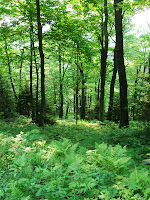 We didn't walk clear to the top. It gets very steep up there, but I made it as far as the point where the trees get stunted and short. We had a little sit down at that point (mind you it was about 7 AM on Sunday). Just then, I heard this strange engine noise. What? A helicopter? No, two guys in hard hats in some small mountain-climbing vehicle bringing some small beams up the mountain - maybe to the tram house at the top. They were driving up the trail in this picture. (I know it doesn't look steep and it isn't particularly right there but that changes). 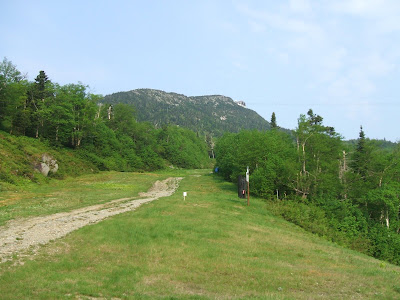 It always amazes me that anyone could drive any form of vehicle on a mountain. The snow cats that groom the ski trails in the winter, and the nerve of their drivers, are sources of amazement for me. And what does it say about the hard-working nature of Vermonters that these guys were up and out on the mountain working at that hour on a Sunday? Just after they passed us I looked back up the trail and there was an ENORMOUS moose; the biggest I have ever seen, standing just up the slope. No horns so I guess it was a female. She was staring at me and Maisy and I thought I was best advised to beat it. Maybe she had a baby around and while I haven't heard that female moose are aggressive I didn't want to take a chance, especially if Maisy took it into her head to bark around the moose's ankles. Time to get down the hill. I am actually getting nervous about meeting a bear on my hikes. I have only seen one at a distance once, and not on Jay Peak. They are there, however, and bears around here have been getting more and more public. A mother bear and cub have been stalking garbage cans in the nearby shire town of Newport lately.

I have written before about my affection for children's books from the 1920s and '30s. Ten years ago I would not have been able to imagine myself having any nostalgia for the '70s, despite its growing vogue. I was 5 years old in 1970 so that is the decade of my childhood, which wasn't so bad. Nevertheless, despite my conviction that the decade marked cultural low point (remember sofas made from "herculon" and all the crappy cars?) I am softening on the '70s. Age, I suppose.

A few weeks back I found a copy of a book I had as a kid in a huge box lot of kids books that we bought at auction. I recall looking at this very book my grandparent's farm which was in Mexico, New York, about a half hour north of Syracuse.

The Farm is my all-time favorite childhood memory, so my kind feelings toward this book are partly generated by that association. (My Dad is the eldest of 12 and his youngest sisters were still living at home when I was a kid. We loved to see them, the animals, the whole package). I know my sister and brother and many cousins feel the same way.

This book must have been next door to a freebie. There were lots of grandchildren to be amused and Monster Movie Matinee (remember that all you Syracusans?) was only on the big color TV in the living room once a week. Also, my grandmother was a book lover. I suspect she picked our copy up at the supermarket. It was compiled by the editors Parent's Magazine and is mostly reprints of older nursery books (ones up my pre-war street and probably copyright-expired and so cheap to reprint). Some of the illustrations were more up-to-date however. This copy is inscribed to a little girl exactly my age.

Leafing through it I realized that I actually liked some of the obviously postwar (50s, 60s, 70s) illustrations for their own intrinisic merit - not just because they reminded me of a happy time. I read once that anything that is true to its times [and executed with some heart] may fall out of fashion but will eventually reveal its merit. I am paraphrasing but that's the idea. I guess this provides some proof of that proposition.
Posted by Kim Velk at 8:06 AM 1 comment: