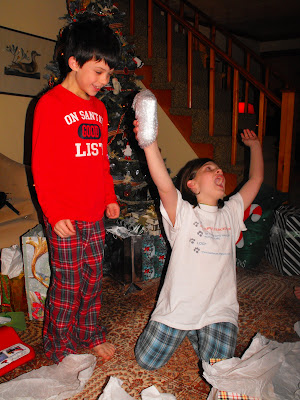 The last two hours of 2009 are twirling away and I thought I would spend them as I spent so much of the year: here, in the old wing chair with my warm laptop in place, taking me where I want to go around the Internet and compensating somewhat for the draft that creeps in from the ugly 1970s bay window on my right.

Lately,I know, I been one poor correspondent and I been too, too hard to find but that doesn't mean you ain't been on my mind.

(These things get into your head and then you are helpless. I sometimes wonder if the last thought that flits through my dying brain will be the jingle for the Frito Bandito).

But I am back and in a discursive mood, though, as ever, stone cold sober. (More on that in a minute). To catch you up on recent events in our small round, Christmas was nice. Above: the Understudy opening her iPod Touch on Christmas morning. Above that (in today's banner), a picture of silver fox I borrowed to decorate a T-shirt for Shackleton who has an Internet avatar called "Shiftyfox", a name that I kind of love. Plenty of snow and cold here on the Vermont/Quebec border. Two days of skiing, about as many of working.

The nuclear Woolfoot family and I are spending a very quiet New Year's Eve, as per our usual. Whusband is on hour fourteen of his phone call with Bangalore trying to remove a 2004 version of an antivirus program from his computer, which has some kind of virus that can't be cured til the 2004 antivirus program goes. O Paradox! Shackleton is turning circles around the living room, flying his Matchbox blimp and Matchbox Delta wing fighter, along with a model John Deere tractor and telling himself a story about them. I can't quite hear it. A train whistle is blowing. The usual Woolfoot glitz and glamor.

Whusband bought a bottle of plonk for Christmas - "Ellenbogen" something or other. It came in a big bottle and had a small price. (A friend pointed out that this should have been a tip to him that as to its quality). Most of it is still available, waiting on the table. And as it's the only semi-potable alcohol in the house and I am planning to tip a glass a little later, a toast to the family and to you all, my bloggy friends. Here's to you! Farewell 2009 and best wishes for 2010. I wish I had something more sparkly.

This puts me in mind of R. Burns and Auld Lang Syne and so provides a segue to this little review of a holiday performance the kids and I attended just before Christmas.

Two weeks ago, I won seats for four at the pending "Christmas Revel/Solstice festival" being staged at Dartmouth College the following weekend. The announcer said something about "a mixture of professional and community performers" and "a Scottish Celebration of the winter solstice."

I realized after the fact that there was some code in this that I failed to decipher.

One missed clue: the Scots stopped celebrating the Solstice around the time they stopped painting their rear-ends blue and harassing the Roman legionnaires who had the bad luck to be posted along the Humber to keep them out of England. Modern day "Solstice" celebrations are the province of unhappy goth teenagers and doughy superannuated hippies. I normally avoid that province. And, duh, this was billed as a "revel," which meant, from my point of view, that something of the opposite would likely occur.

The Scots bit got me though. Many of us north Americans have a kind of Scottish sweet tooth - albeit one that relies on a kind of theme-park image Scots during the age of Robert Burns. I for one, am willing to allow the Scots to advance at least to the era of the Bay City Rollers, but, and here's a tip for anyone arranging an entertainment for American families with "Scotland" on the bill, there must be lots of drums and pipes- and they need to be loud! ("Stirring" being the minimum requirement for Scots-themed entertainment).

I checked the Revels website before we left the Last House for the hour and half journey south to Hanover and saw that two of the four shows had sold out. That was reassuring. Of course, I failed to take into account that we were headed to a university town on the northern end of the Connecticut River. (I.e., with a built-in audience of people who can be counted on to send checks to PBS, buy recordings of Garrison Keillor and generally support any highish [white] brow culture).

A stout gray-haired lady with a bit of tartan thrown over her shoulder kindly showed us, after a bit of confusion, to our free seats said, with obvious loyalty to the organization, "it's a good show." Volunteerism is lovely of course, but it signals that one is the realm of "Community Theater". We make allowances for Community Theater because our friends and neighbors are performing, but I was an hour and half away from home and expecting something that (other) people paid for because it was, well, professional.

I won't go on too much more. There were knee socks a plenty, two teenagers who somehow were persuaded to do Morris Dancing (cavort, cavort, PRESENT, cavort, cavort, PRESENT). A man came out and read Burns' poems in Scots dialect (the kid in front of us kept asking, "what did he say?" I am sure no one in the audience could have answered him). The professional performers, I am guessing, were a pair of women fiddlers and a drummer who rendered a few of those tuneless Gaelic fiddling screes. It was very skillfully done, but a little of this goes a long way. I am guessing that the Scots in the era of Burns found it entertaining because they were drunk or about to be.

We must have been about an hour into all of this when we got to a number called "The Lord of the Dance" (thank you Michael Flatley - never mind about the distinction between Ireland and Scotland - it is not much recognized in North America). This involved the performers coming off the stage and dancing through the aisles, inviting all the non-drunk white people (the entire audience) to join them. I stole a glance at the program and saw we had an hour and some left to go, so the kids and I danced (well, not actually, we walked) up and out of the theater and ran (literally, it was cold) to the parking lot.

The Understudy summed it up well when she called Whusband from the minivan to tell him we were on our way home. (Whusband had a ticket but begged off). "Well, we left early," she said, "'cause it was kind of dorky."
Posted by Kim Velk at 7:42 AM 3 comments: